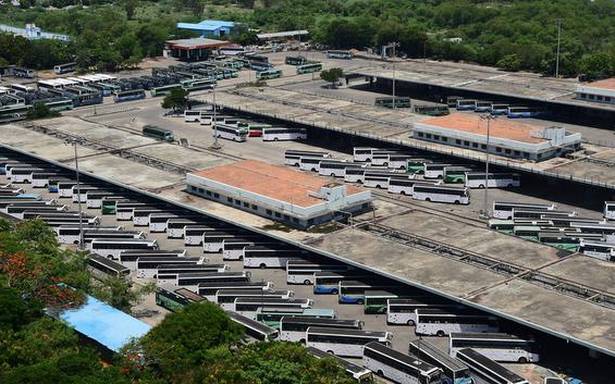 Apart from 6,300 regular and 3,506 special buses from Chennai, 6,734 buses will be operated from other parts of TN to enable residents to reach their home towns for the festival

The TN Transport Department, to help people celebrate Deepavali, which falls on November 4, will be operating a total of 16,540 buses including nearly 10,000 buses from Chennai and more than 6,500 special buses between other parts of the State.

The State Transport Department has segregated the bus routes originating from the city to various districts in the State and would operate regular and special buses from five bus termini including Madhavaram (bound for Uthukottai via Red Hills, Ponneri and Gumidipoondi), K.K. Nagar (Puducherry and Cuddalore via ECR), Tambaram MEPZ (Tindivanam, Vikravandi, Panruti, and Kumbakonam), Poonamallee (Kancheepuram, Vellore, Arani, Arcot, Thirupathur, and Dharmapuri), and Koyambedu (Nagapattinam, Velankanni, Tiruchi, Madurai, Tirunelveli, Salem, and Coimbatore).

Similarly the Transport Department, to help people get back to Chennai and other places after celebrating Deepavali in their home towns, has made arrangements for operating a total of 17,719 buses, which include 8,400 regular buses, 4,319 special buses and 5,000 special buses between various destinations outside the city. The Transport Department would be operating these buses from November 5 to 8.

The Transport Minister has directed the Metropolitan Transport Corporation (MTC) to operate link buses from Koyambedu bus terminus to the four other bus termini round the clock for the benefit of the commuters.