On September 1, the gram sabha of Kakalgud resolved they would not give any more trees from the forest around their village. 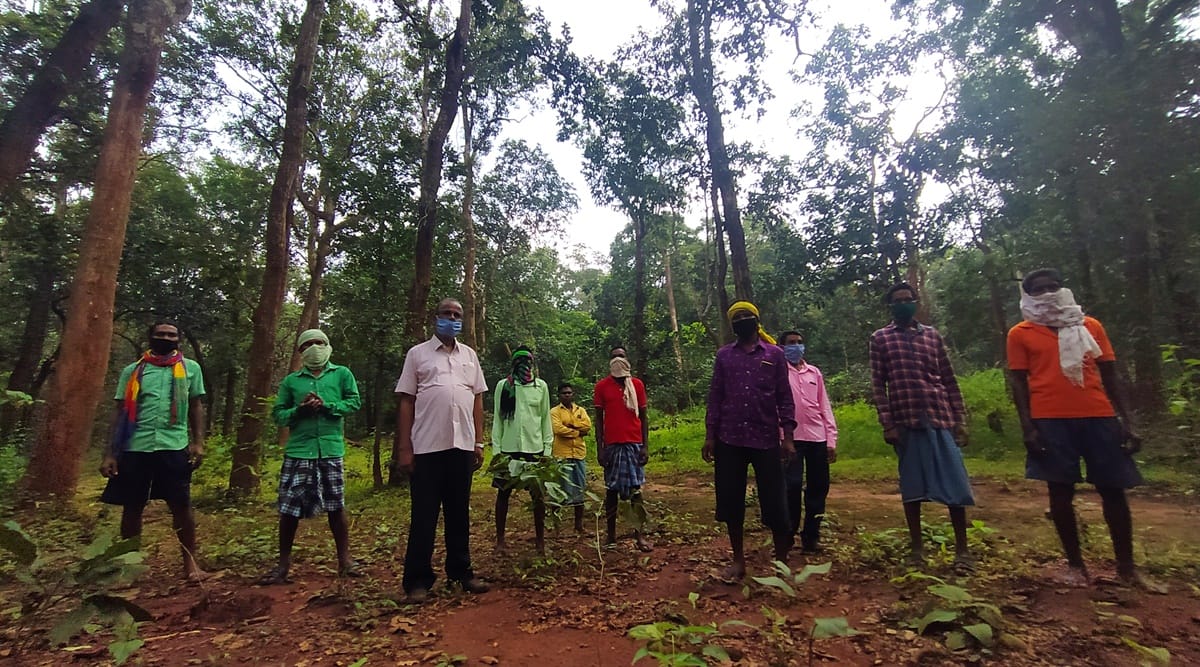 Less than 4 km from the roadside memorial to the victims of the 2013 Maoist attack in Chhattisgarh’s Jhiram Ghati lies a giant sal, its full 150 feet sprawled on the forest floor. Off the road that winds through the jungle, several small and big trees bear signs of recent hacking. On October 5, at least 108 trees in this forest were felled to build the chariot that is traditionally used during the Dussehra festivities in Bastar, local people said.

Trees in the area around Jhiram Ghati were cut for this year’s celebrations because the village custodians of another patch of forest some 5 km away as the crow flies, which has supplied the chariot’s timber for the past 20 years, decided to no longer allow the practice.

On September 1, the gram sabha of Kakalgud resolved they would not give any more trees from the forest around their village.

“The 1,000-odd acres of jungle around our village is called Gadiya Malaang. The name was given by our forefathers because it was full of sal trees,” said Rambati, a former sarpanch of Kakalgud – “gadh (home or bastion in the local language) tha unka”.

For years, trees from the forest were cut for the Dussehra chariot of Jagdalpur, Rambati said. Another villager, Ramuram (30), said, “We applied for community forest rights in 2017, but we never heard back from the government. But we do know that we can take decisions about our part of the forest. We will not let any trees be cut.”

Sadhu (28) said the villagers had submitted a letter to the collector of the district. They had tried “everything”, he said, but all they got from government officials was talk about “right and wrong, tradition and disrespect”.

Bhagwan, one of the village elders locally referred to as ‘siyaan’, described how the tree-felling tradition came to be. “The royal house (of Bastar) assigned each village specific tasks for Dussehra. For the cutting of trees, seven villages were identified, from where people would gather at Gadiya Malaang, and the trees would be cut. The tradition continued even after the royals were no longer there, as a form of respect to the king.”

However, “respect should not become a cause for destruction”, Bhagwan said. “The village has unanimously decided to not give the trees. We are not disrespecting tradition, and are still giving rope, which too was assigned to us long ago.”

In the face of the villagers’ decision, the Dussehra committee of Bastar decided to respect the boundaries of the village, and cut trees from a different part of the forest – around Jhiram Ghati. There, villagers of Kakalgud pointed to at least 10 smaller, leaner trunks of sal lying abandoned by the road. “The smaller tree trunks are not even counted, so many of them are used as just levers (to pull down and roll bigger trees),” Sadhu said. 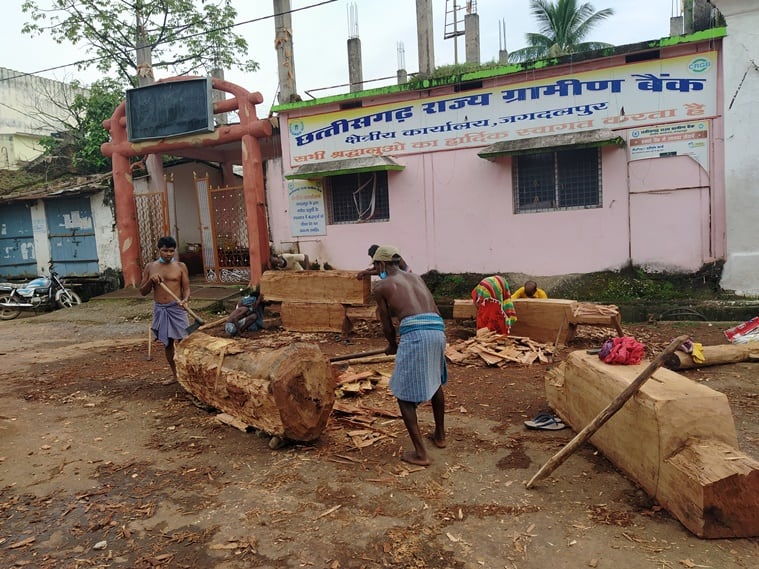 The huge 150-foot sal was not taken away apparently because the trunk’s core was found to be hollow. But Kakalgud’s villagers believe it was strong and had many years to live.

“Sal grows slowly, and this tree had grown for decades. We worship these trees, and to see them destroyed is painful,” Ramuram said. Sukaru, one of the younger, college-going villagers, said, his voice rising in agitation: “They cut the trees and leave them to rot or shrink if they are not to their liking. They damage tree barks, uproot small, lean trees, and leave them by the road. Why should we allow our jungles to suffer in this way?”

Tribal activist Arjun Nag explained the deep emotional connect that tribal people feel with the forest: “They have co-existed for so long, otherwise we wouldn’t have the jungles in the first place. The adivasi takes only what he needs, and ensures that it is given back to the jungle. The committee has been cutting trees around Kakalgud for years, but has not planted a single tree yet.”

On October 5, when the tree-cutters came in their 23 trucks, the villagers of Kakalgud were out on the road. Local officials had assured them that their forest would not be touched, and that trees would be taken from elsewhere– but the villagers were still fearful. 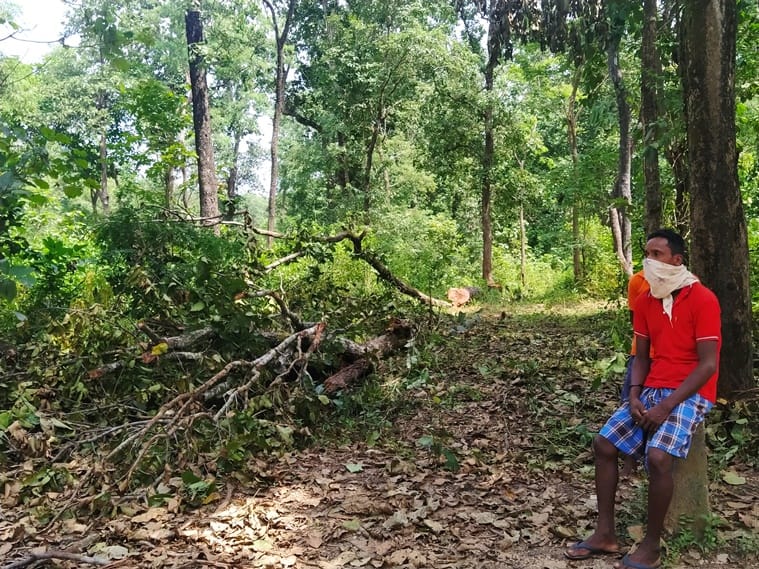 “We decided to follow the vehicles. For more than eight hours, every man, woman, and child stood on the road, covering our forest, waiting to see how many trees they would carry away this time,” Rambati said. In the end, they counted the trunks of more than a hundred trees.

At Jagdalpur, more than 50 men from two villages in Bakawand block were labouring on the Dussehra chariot. One of them, Baldev Bhagat of Jharumar in Bastar, said: “This year we have been brought to work four days late, because the trees were cut late. We are working day and night on a strict deadline.”

Bhagat has another concern. “Traditionally, we are not paid for this work. We are fed and given a place to sleep, and at the end, the entire village might get a goat or a few hundred rupees. But I need money for my children’s school fees. Why can’t we be compensated for being part of this big tradition?” he asked. 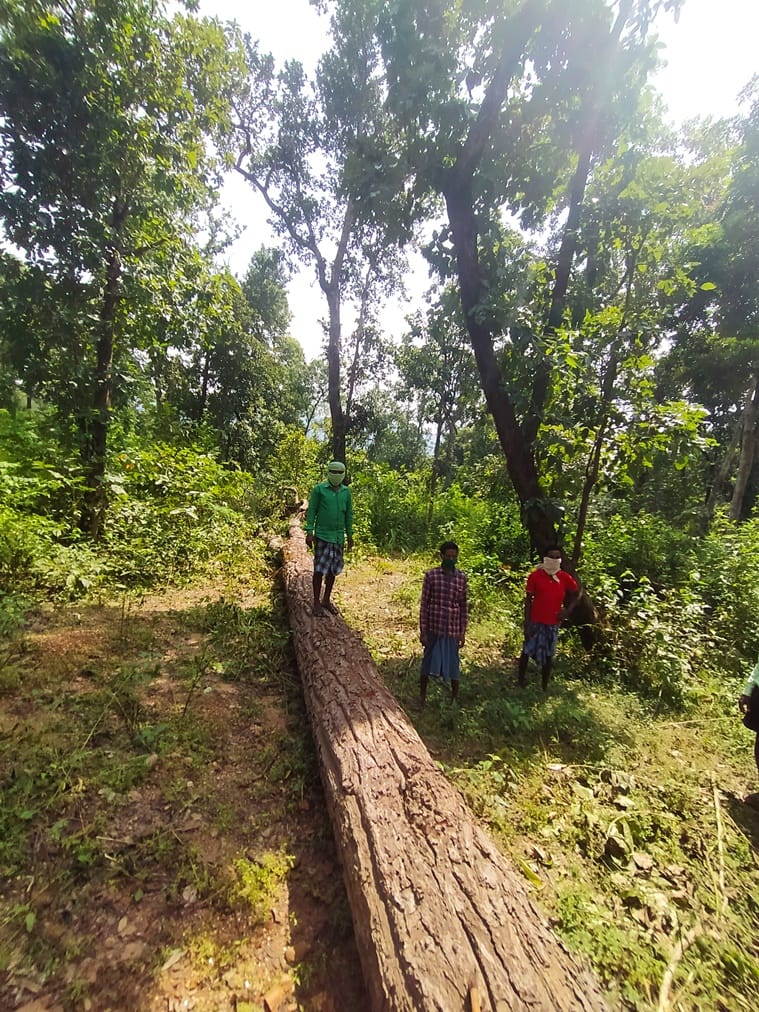 Nag, who has been working with Bastar’s tribals for many years, said: “As part of the tradition, villagers were assigned tasks, and at the end of the festivities, the king held court with the siyaans and manjhis, the village elders, at the Mudiya Darbar. The celebration and the Darbar are still there, but the villagers, who are expected to keep doing their duty, have to pay an entry fee.”

Deepak Baij, the Congress Lok Sabha MP from Bastar, who is part of the Dussehra committee, claimed that only 50-60 trees were cut. “Every year we cut only the minimum number of trees that are needed. Not more than 50-60 trees have been cut,” Baij said. The festivities too, would be low-key due to the Covid-19 pandemic this year, he said.

Kakalgud resident Somaru said, “If only 60 trees were cut, why were 23 trucks brought in? We saw it with our own eyes. They lie, and we will not allow them to cut our trees.” Siyaan Bhagwan added, “If they want, they can cut the trees every decade or so, for the chariot. But at least let some trees grow for some years.”

Madhu Ramnath, a botanist and activist who has worked for years in the Gadiya Malaang forest, said: “Due to the annual cutting of trees, the biodiversity and native fauna of this jungle has been severely impacted. It was important for the village to understand the damage and stand up against it.”