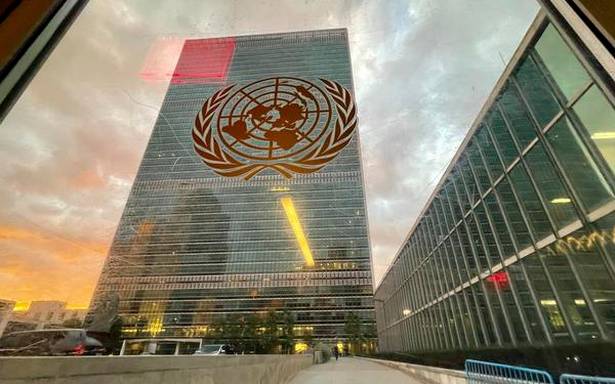 Mechanism to induct women cadets into NDA will be ready in May 2022, Defence Ministry tells Supreme Court

The government has informed the Supreme Court that it proposes to have the ‘mechanism’ to induct women cadets into the National Defence Academy (NDA) for entry into the Armed Forces to be ready in May 2022. The Ministry of Defence told the court in an affidavit that the Union Public Services Commission (UPSC) would include women in its NDA exam notification expected to be published in May, 2022.

News Analysis| Ceasefire between India and Pakistan expected to hold

Guns continue to remain silent along the Line of Control (LoC) in Kashmir between India and Pakistan with the ceasefire understanding between the two sides holding ground, with officials estimating that this will hold for the next few months before winter sets in. However, local recruitment remains a cause for concern as shown by data and acknowledged by officials.

UN Secretary-General Antonio Guterres on Tuesday urged the United States and China to engage in dialogue, warning of an increasingly divided world. “I fear our world is creeping towards two different sets of economic, trade, financial and technology rules, two divergent approaches in the development of artificial intelligence — and ultimately two different military and geopolitical strategies,” Mr. Guterres said as he opened the annual UN General Assembly.

Housing and Urban Affairs Minister Hardeep Singh Puri on Tuesday said 600 more workers would join the Central Vista Avenue redevelopment project, which was expected to be completed before the Republic Day Parade in 2022.

Assam Chief Minister Himanta Biswa Sarma is expected to play a major role in the Naga peace process that ran into trouble after former Nagaland Governor R.N. Ravi allegedly circulated a ‘modified’ version of the Framework Agreement in August 2020.

French President Emmanuel Macron discussed on Tuesday co-operating over the Indo-Pacific region with Indian Prime Minister Narendra Modi, as France deals with the fallout from Australia’s cancellation of a $40 billion French submarine order.

The combing operation of security forces near the Line of Control (LoC) in north Kashmir’s Uri in Baramulla district continued for the third day on Tuesday, as the Army said it foiled “a major infiltration” bid. “Searches are on in the area,” an official said.

Virat Kohli’s decision to quit Royal Challengers Bangalore (RCB) captaincy after the ongoing season had no impact on the team’s performance against Kolkata Knight Riders, asserted head coach Mike Hesson. RCB were handed a nine-wicket loss by by KKR, a day after skipper Kohli announced he will step down as captain of the IPL team at the end of the ongoing season.

British tennis must capitalise on Emma Raducanu’s U.S. Open triumph and make the sport more accessible to ensure the wait for another Grand Slam champion is not too long, former world number one Andy Murray said.

At least 86% of sellers who participated in a survey expect an increase in sales this year. More than 50% of them are hopeful of a 25% growth compared to last year, while one in four sellers anticipate doubling their business through festive season sales this year, said a Nielsen study conducted among 2,000 sellers registered on Amazon.in between August 30 and September 9, 2021.

A pilot and a co-pilot were killed on Tuesday morning when an Army helicopter crash-landed in a forest area in Udhampur. The deceased were identified as Major Rohit Kumar and Major Anuj Rajput.

Former Congress president Rahul Gandhi’s sharp attack on the Bharatiya Janata Party’s (BJP) ‘Hindu’ credentials last week has put the spotlight back on his own and his party’s dilemma in articulating the question of religious identity. It could be a matter of debate whether or not the Congress’s attempt to recast its image will work but it is clear that Mr. Gandhi is keen on taking the fight to the BJP’s own turf of Hindutva politics, seeking to distinguish it from the larger Hindu identity.

The Taliban-ruled Afghanistan has banned the broadcast of the hugely popular Indian Premier League (IPL) in the country over the presence of “female audience and spectators” in stadiums. Ever since the Taliban’s takeover of the strife-torn country last month, the international sporting community has been concerned about the fundamentalist group’s position on women participating in sports.

Businessman Raj Kundra on September 21 walked out of a Mumbai jail, a day after a magistrate court in Mumbai granted bail to the key accused in a pornographic films case in which he was arrested two months ago.