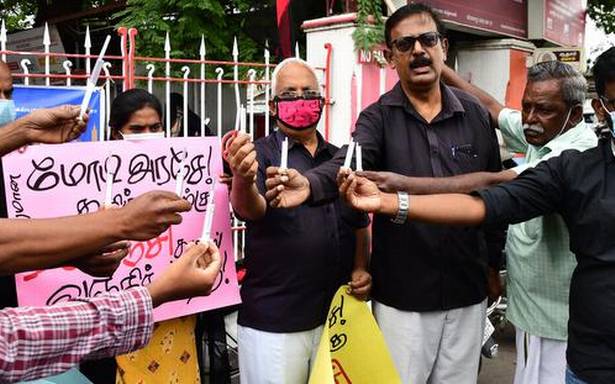 In a protest against the shortage of COVID-19 vaccine doses in Tamil Nadu, members of the Thanthai Periyar Dravidar Kazhagam (TPDK) sent empty syringes to Prime Minister Narendra Modi, demanding increased allocation of vaccine doses to the State.

Led by TPDK’s general secretary K. Ramakrishnan, members gathered outside the Head Post Office on Goods Shed Road in Coimbatore. They staged a short demonstration with the empty syringes and placards accusing the Central government of not allocating adequate vaccine doses to the State.

“We sent 15 empty syringes through post,” Mr. Ramakrishnan said, noting that the package was addressed to the Prime Minister’s residence in New Delhi. An accompanying letter accused the Central government of “gross injustice” as it allocated over 400 doses per 1,000 of the eligible population to States such as Gujarat, Karnataka and Rajasthan while Tamil Nadu received only 302 doses per 1,000 of the eligible population.

The TPDK members sent empty syringes from all the district headquarters in the State to Mr. Modi, Mr. Ramakrishnan said, warning of intensified protests against the Central government if the vaccine allocation is not increased at the earliest.