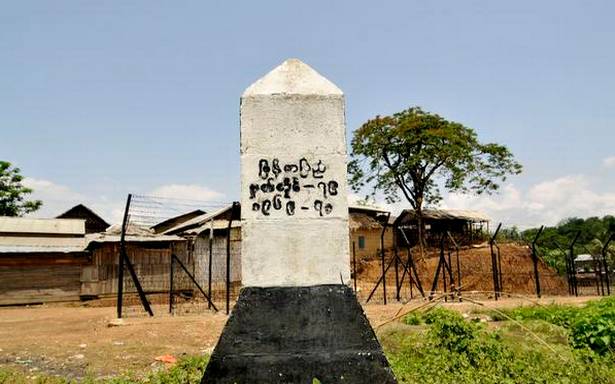 Manipur Police and hundreds of Indian traders, shopkeepers and others pushed back a large number of traders from Myanmar on Saturday morning from Moreh, the Indian border trade town. The police, led by Additional Superintendent of Police S. Gangte, assisted Indian traders in driving out foreign traders.

One shopkeeper said, “For some weeks, these traders from Myanmar have been sneaking into Manipur to sell various items at much cheaper rates, with the result that we have been driven out of business.” Police sources said that people have been sneaking into Moreh from the international gate number 2 and other areas that don’t have security personnel. There is no special arrangement for foreigners to sell their goods at Moreh.

Officials said that the Indo-Myanmar border was sealed on March 10, 2020 due to the rising number of COVID-19 infections reported in towns and villages near Moreh. Health facilities in these areas are known to be primitive. Moreover, Myanmar’s military leadership is situated away from the border areas where insurgency rules.

Shopkeepers said that in view of the sealing of the international border, traders in Myanmar were demanding higher prices, making everything costlier in the neighbouring country. Meanwhile, traders paying less in Myanmar were able to sell at 20% lower cost across the border in India. Shopkeepers in Moreh complained that for weeks, they had not sold anything to the traders coming from Manipur and other northeastern States. They submitted memorandums to civil society organisations and the district administration to look into the matter.

Sources said that the closure of the international border has led to a rise in smuggling, although no action has been taken against this. The Manipur Police, Assam Rifles personnel and other officials have been seizing gold, precious stones, narcotics and other contraband near Moreh. But only some drivers and errand boys have been nabbed. “Powerful and influential” smugglers have never been accounted for, anti-drug campaigners point out.