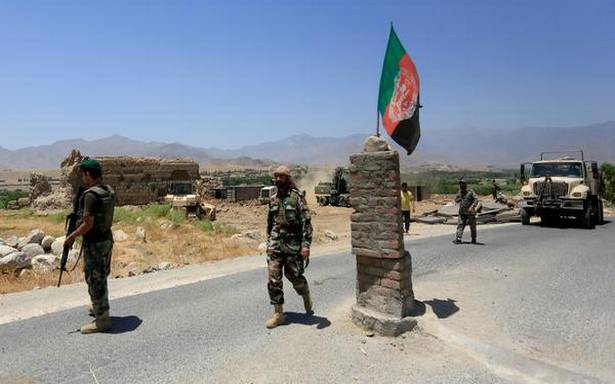 As the reality of the U.S. withdrawal takes hold, the future will depend on Taliban-Kabul dynamics and Pakistan’s role

Could anyone have predicted when the U.S. commenced its military intervention in Afghanistan in October 2001 that it would get embroiled in an endless war for 20 years and to exit safely, it would have to negotiate with the Taliban, the same entity that it went in to punish?

It has been a costly lesson. The war effort has cost $980 billion, over 2,400 U.S. soldiers (plus 1,144 allied troops) and 388 private military contractors have lost their lives. It also spent $143 billion on reconstruction; about $90 billion went for the Afghan army, police and other security forces, $36 billion for governance and economic development activities (the rest of the international community contributed an equivalent amount) and the balance on counter-narcotics and humanitarian relief works.

Yet, the real price has been paid by the Afghans. The 20-year war has claimed the lives of nearly 50,000 Afghan civilians and nearly 70,000 Afghan security forces (a majority during the last seven years); add to it another 60,000 Afghan Taliban, and the scale of the Afghan human loss becomes evident.

For U.S. President Bush, the objective was “to build a stable, strong, effectively governed Afghanistan that won’t degenerate into chaos”. As the U.S. shifted from counter-terrorism to counter-insurgency, shades of Vietnam began to emerge. To Hamid Karzai’s credit, he saw the writing on the wall when he protested about the night-raids and warned the Americans “to either take the fight to the safe havens and sanctuaries across the Durand Line or make peace with the Taliban” but it only soured his relations with the U.S.

Eventually, U.S. President Barack Obama diluted the objective to “preventing Afghanistan from becoming a safe haven for global terrorism”. He oversaw a successful operation to eliminate Osama bin Laden in 2011, implemented an unsuccessful military surge concluding with an end to combat operations in end-2014 and Taliban opened the Doha office in 2013.

U.S. President Donald Trump saw himself as a deal-maker and in 2018, initiated direct negotiations with the Taliban. Ambassador Zalmay Khalilzad (U.S. Special Representative for Afghanistan Reconciliation) began by setting out four elements — a ceasefire, cutting ties with al Qaeda and other terrorist groups, intra-Afghan peace talks, and, a withdrawal of all foreign military forces, declaring that “nothing is agreed till everything is agreed”. Within months, the Taliban had whittled down the U.S. demands till it got what it wanted — a withdrawal timeline not linked to the other factors. In addition, the Taliban managed to get the U.S. to push the Kabul government to release over 5,000 Taliban cadres in custody. In short, the U.S. ended up legitimising the Taliban at the expense of the government in Kabul that they had worked to create and support.

U.S. President Joe Biden was no stranger to the Afghan dossier. He was convinced that the U.S. had to exit from its quagmire of “forever wars”. The U.S. may have decided that it had no military options but the Taliban are still pushing ahead militarily.

From less than a fifth, today, over a third of Afghanistan’s over 400 districts are under Taliban control. The day after the exit from Bagram, 13 districts, in Badakhshan, Takhar, Paktia and Kandahar fell to the Taliban, adding to the 50 that have fallen since May. In many cases, the locals manning the security posts and checkpoints have just surrendered. From villages and towns, there is already a move towards the cities. Intra-Afghan talks in Doha have been in limbo for months.

Questions about the future

Gen. Austin S. Miller, the U.S. commander in Afghanistan, indicated in a recent press conference, “Civil war is certainly a path that can be visualised if it continues on this trajectory.”Dr. Abdullah Abdullah, Chairman of the High Council for National Reconciliation, warned on June 30, “The truth is, today the survival, security and unity of Afghanistan is in danger….”

Ironically, the most vocal critics of the U.S. overstaying in Afghanistan and hinting that the U.S. would never leave are the ones now blaming the U.S. for a hasty and irresponsible withdrawal.

In coming months, as uncertainties mount, there will be increasing Taliban presence in the countryside as the Kabul government concentrates on ensuring security in urban areas and of the road networks. The Taliban military strategy has been to target districts that enable them to surround provincial capitals. The clutch in the northeast including Badakhshan, Takhar, Kunduz and Baghlan enable them to control the Afghanistan–Tajikistan border and the Wakhan corridor that links to China. In the east, they exert control in Ghazni, Zabul and Paktia while the Haqqani network is active in Khost and Paktika, and the IS-K in Nangarhar, Kunar and Laghman. Further south, the Taliban control large parts of Kandahar, Helmand and Farah (bordering Iran).

As the reality of the U.S. withdrawal takes hold, how events unfold by end-2021 depends on three factors. First, have the Taliban changed their ideological colours? The U.S. in recent years, and Pakistan for much longer, have been pushing this line but the Taliban leadership have given no clues about it. Related to this is the question of Taliban unity. Distances have grown between the Quetta shura, the Doha negotiators and the fighters who want to guard their individual preserves. This works as long as everyone is pursuing the military option, but when it comes to power sharing, who calls the shots? Or, does it lead to no power sharing?

Second, can the Kabul regime present a unified front? If the leaders in Kabul and the government continue sniping at each other, it will adversely impact the integrity of the chain of command of the Afghan security forces. If opportunistic leaders are tempted to strike their own deals with the Taliban, it will only hasten the collapse, and even western funding will dry up.

Finally, is Pakistan still seeking strategic depth in Afghanistan or has it realised that a Taliban-dominated Kabul will be a magnet for its own home-grown extremists as well as those from the neighbourhood? Can it persuade the Taliban that its legitimacy will be at risk unless it shares power? Pakistan’s influence will weaken once the Rehbari Shura decides to move back from Quetta to Afghanistan.

History tells us that in Afghanistan, there have only been winners and losers, seldom any lasting compromises.

Rakesh Sood is a former diplomat and presently, Distinguished Fellow at the Observer Research Foundation