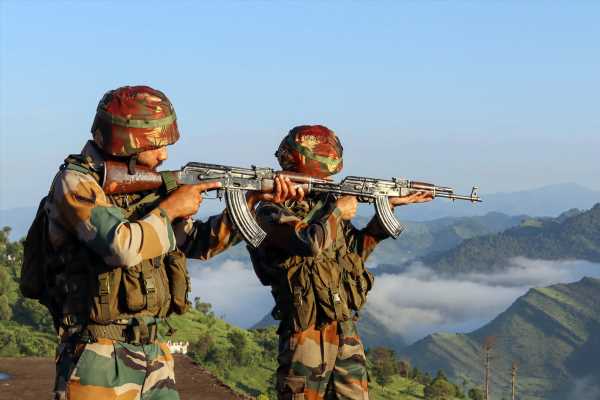 ‘They keep issuing statements to win a few rounds of applause.’

Before he retired as Meghalaya’s governor Satya Pal Malik served as governor of Jammu and Kashmir before being moved to the Raj Bhavan in Goa.

After the Narendra Damodardas Modi government refused to negotiate with farmers over the issue of minimum support price (MSP), Malik fell out with the prime minister.

Malik has no plans to join any political party, but will continue to address political meetings and speak out in support of farmers issues.

“There was one way in which they could have got PoK,” Malik tells Rediff.com Senior Contributor Rashme Sehgal about Defence Minister Rajnath Singh’s recent statement that the Modi government will take back Pakistan occupied Kashmir.

“The Indian government would have done so much development in Kashmir that the people in PoK would have revolted against Pakistan,” says Malik in the concluding segment of a two-part interview.

But there has been no case of the J&K police having objected to the removal of Article 370.

No. They remained faithful. Nobody did anything.

Subsequent to this, Sajjad Lone, the Kashmir MLA, was ready to form a government in J&K as was Mehbooba Mufti.
They went public to say that the fax machine at the governor’s house was not working.

She would have reinstated Article 370 and it would have been impossible subsequently to remove it.

Did Mehbooba Mufti try sending you a fax which you did not receive?

They tried to contact me on the day of the festival of Id when my entire staff was on leave.

Governments are not formed by sending Whatsapp and Twitter messages (to the governor).

There are two requirements necessary to lay claim to form a government.

Other parties in the state should have issued statements in their support. This was not done.

To claim that they could not contact me was wrong. The doors of Raj Bhavan were open 24 hours in a day.

Three flights come in from Jammu to Srinagar on a daily basis. Mehbooba could have sent somebody to meet me.

But you alienated leading parties in Kashmir by claiming they were corrupt.

I spoke the truth. What dealings do I have with these families? It is the constant appeasement shown to them by successive governments that is responsible for the mess in Kashmir even today.

But they are the ones who win elections.

They are irrelevant. We have to look at the younger people and allow a younger generation to come into power now.

But the BJP chose to form a government with Mufti Mohammed Sayeed and Mehbooba Mufti.

That was also appeasement. Mehbooba is a supporter of the Jamaat e Islami. Why should they have formed a government with her?

You claim you were offered bribes of Rs 300 crore when you were governor of J&K. Did the concerned parties actually come to you and offer you the money to get their files cleared?

Kashmir is full of afwaah (rumours). Most of the time they are correct.

Will the Kashmir situation ever get resolved?

When I was there, it could have been resolved. The Hurriyat understood I meant business. They never issued a single statement against me.

I have never made an anti-Muslim remark in my entire career, but anti-Muslim rhetoric suits the present government and helps them win elections.

You accused the Goa government of corruption.

Yes. They did not remove the chief minister (Pramod Sawant) of Goa, but chose to remove me.

The north-east states are also rumoured to be very corrupt.

The chief minister of Meghalaya was a better person. (Conrad Sangma) His father (P A) Sangma is known to me.

He is a very amiable person and my friend. If I heard of something (corruption cases), I would inform him.

Corruption seems to me to be across the board.

Yes, in all our universities the RSS are appointing very corrupt and incompetent people.

When I was contacted in J&K which has a central university, I was told Baaees – Ikkees per cent theek hai to dekh lena. Bahut kharaab hai to mat rakhna. (If he is 20 to 21 per cent ok, then appoint him. If he is very bad, then do not appoint him).

I did not listen to their suggestions. The north-east does not have a central university. It is a nonsensical statement. The Chinese are present in PoK and have built a road there. It will lead to a full fledged war with China.

They keep issuing statements to win a few rounds of applause.

Yes, there was one way in which they could have got PoK. The Indian government would have done so much development in Kashmir that the people in PoK would have revolted against Pakistan.

Are you saying the situation in India will continue as will corruption?

The drift will continue. The situation will only get worse. All our institutions are getting compromised. The Agneepath scheme will destroy the army.