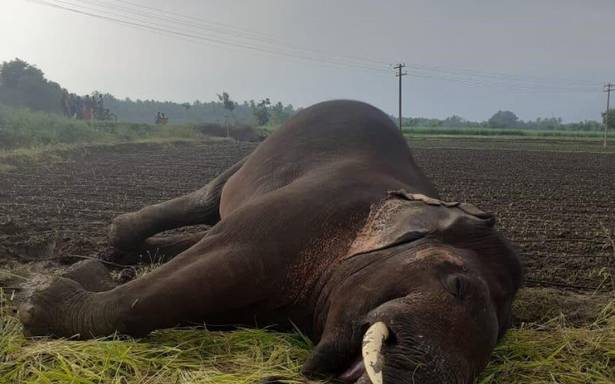 A male wild elephant was found electrocuted in a paddy field at Semmedu near Pooluvapatti, around 35 km from Coimbatore city, on Tuesday morning.

Forest Department officials said that the tusker aged about 20 years died of electrocution from a fence erected around the paddy field which was powered illegally.

The paddy field belonging to a farmer named Durai alias Aruchamy is situated approximately 2 km away from a reserve forest area of Mullangadu beat, said officials with the Department.

After being alerted by villagers around 6.30 a.m., frontline staff of the Department, who were involved in driving out another tusker near Mullangadu forest check post, rushed to the spot. Electricity Department officials were immediately called to the location.

“During the inspection by a forest range officer and Electricity Department officials, it was revealed that a steel wire fence had been erected around the farm field and that electricity had been stolen from the main location by wire to the steel wire fence,” said a statement issued by the Forest Department.

The owner of the farm, Durai, was in the paddy field at night according to a farmer of a nearby farm.

“As soon as the elephant died, the owner of the paddy field removed the wires used to supply electricity to the steel wire fence and escaped. A wildlife offence report (WLOR) has been registered against him,” the statement said.

The Department has made arrangements for the autopsy of the elephant.