In the midst of the 35-day-long political drama, the Pilot camp had accused the Gehlot government of tapping phones of MLAs. The police had denied the allegations. LESS than two months after Rajasthan Chief Minister Ashok Gehlot and former Deputy CM Sachin Pilot called a truce after a public and bitter tussle, the state police has filed an FIR against Pilot’s media manager Lokendra Singh and Aaj Tak’s Jaipur-based Editor Sharat Kumar, accusing them of spreading “misleading and fake news” regarding tapping of phones of MLAs sequestered by the CM at a hotel in Jaisalmer.

In the midst of the 35-day-long political drama, the Pilot camp had accused the Gehlot government of tapping phones of MLAs. The police had denied the allegations.

As per the FIR, lodged on October 1, Satyapal Singh, the Duty Officer at the Police Control Room at Jaipur Police Commissionerate, reported that on August 7, Constable Surendra Yadav had showed him “misleading news” being shared on WhatsApp that phones of MLAs who were in Jaisalmer were being recorded. 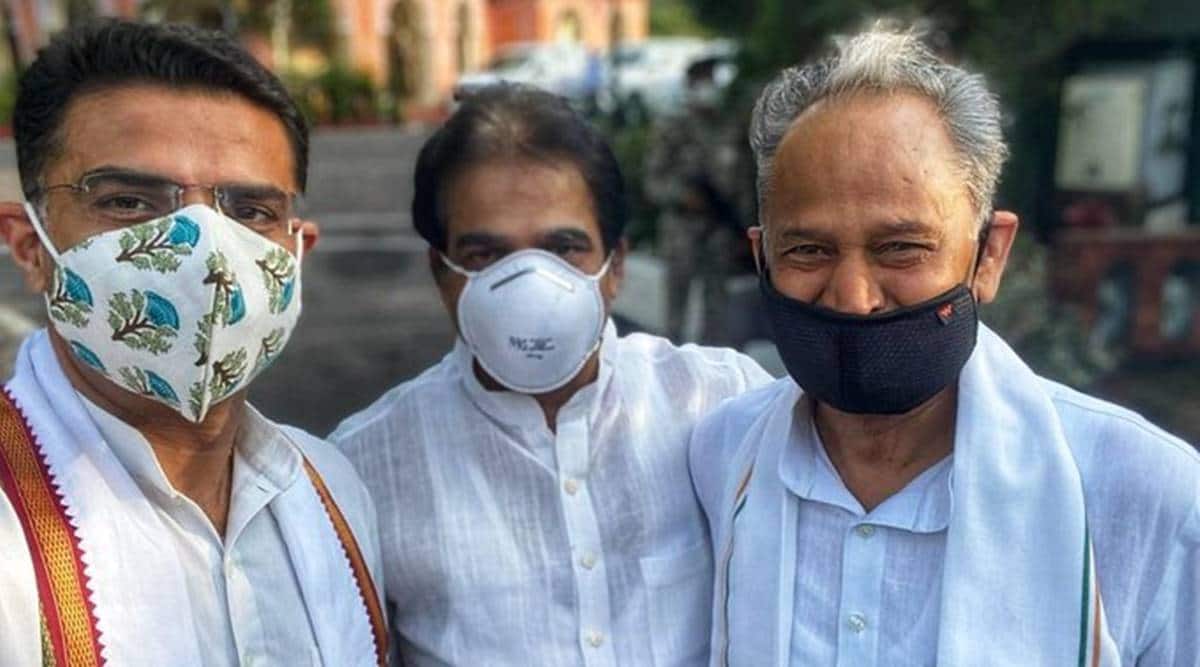 The FIR says this was investigated by Surendra Pancholi, SHO, Special Offences and Cyber Crime Police Station. Pancholi recorded statements of Lokendra Singh, who runs XYZ news agency, and Kumar, as well as made a transcript of a TV report by the journalist on the allegations of tapping. Sources said Singh’s statement was recorded at Pilot’s residence on August 20, six days after Gehlot had won the trust vote.

“They couldn’t give a logical response when asked about the source of (the) fake news,” the FIR says, adding that “the investigation makes it clear that Lokendra Singh of XYZ news agency and Sharat Kumar of Rajasthan Tak (Aaj Tak) are responsible for spreading the misleading and fake news.”

Singh has been summoned for questioning on Thursday, along with his mobile and computer through which he allegedly disseminated the news. Sharat Kumar said, “All news channels ran the news story from morning till evening. Why is one channel being singled out?”

Sources close to Pilot termed the FIR “odd”, asking why it was being lodged two months on. Gehlot holds the Home portfolio in the state.

The FIR accuses Singh and Kumar of “prima facie” creating the “fake” story, and says Kumar, without verifying the authenticity of the news doing the rounds on social media, aired it on August 7. The FIR says the police also reached out to Rajasthan Patrika and Dainik Bhaskar, which had carried the allegations, and the newspapers said they had published the same after initial reports by XYZ and Aaj Tak.

Pancholi’s phone was switched off and he could not be reached for comments,

The FIR has been lodged at Jaipur’s Vidhayak Puri Police Station under IPC Sections 505 (1) (over any statement, rumour or report), 505 (2) (statements creating or promoting enmity, hatred or ill-will between classes), and 120 B (criminal conspiracy), along with Section 76 of the IT Act. Under the latter, an electronic device linked to any violation under the Act “shall be liable to confiscation”.

Sources close to Pilot said: “This comes a day after Rahul Gandhi said (in Punjab) give me free press and other key institutions, and this (Narendra Modi) government will not last long. Here in Rajasthan, Gehlot is doing exactly like Modi. And he is the Home Minister too, so he cannot claim ignorance about the case.”

On August 7, the Pilot camp had accused the CM of tapping the phones of at least six MLAs belonging to his own camp staying at Hotel Suryagarh in Jaisalmer, with the help of the police. It had also shared a document purportedly showing a list of calls made to the MLAs.

The statement by the Pilot camp claimed that, “Four jammers have been installed at Suryagarh resort by Ajaib Electronics and there is just one place in the entire hotel from where calls can be made.”

Calling the allegations “untrue information” and “illegal”, the police had said: “No unit of Rajasthan Police is involved in tapping (phones) of any MLA or MP, nor was it conducted earlier… Even the allegation of recording intercom conversations is untrue and fictitious.”

Tensions between Gehlot and Pilot have been simmering despite the Congress high command’s mediation. The CM’s absence has been noted at PCC events to mark the Rajiv Gandhi Jayanti and Gandhi Jayanti, where Pilot was present. Last month, Pilot supporter Naresh Meena, who was Covid positive then, was arrested for protesting against illegal mining outside a police station.

BJP state president Satish Poonia said: “Ashok Gehlot says big things about the threat to democracy, but he is now resorting to suppression of its fourth pillar. The reason is that in the past few days, journalists have raised their voice for the protection of the deprived and women.”

The People’s Union for Civil Liberties called the police action “vindictiveness of the Rajasthan Government led by CM Ashok Gehlot”, and asked it to “come clean on the issue of phone tapping”.