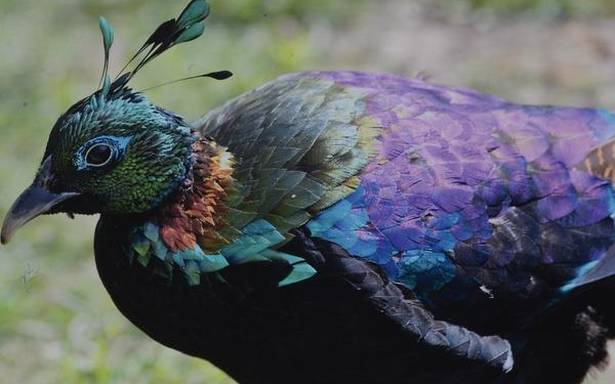 A trio of wildlife enthusiasts – Obang Mibang, Tajir Tamuk and Geyong Tayeng – led by Mt. Everest climber Kishon Tekseng and his team sighted the birds on Mount Eko Dumbing at 4,173 metres above mean sea level. The sighting was during an expedition in April.

“Sighting the two species of pheasants is a good indicator of the ecology of the area,” Dr. Tamuk, an orthopaedic surgeon at a private hospital in Assam’s Dibrugarh, told The Hindu.

A male Sclater’s monal, listed as vulnerable by the International Union of Conservation of Nature was also sighted near Komji Lipik at an altitude of 2,850 metres. A pair of male and female Himalayan monal was sighted at Bomeh at 3,700 metres above mean sea level.

Komji Lipik and Bomeh, also in Upper Siang district, are on the way to Mount Eko Dumbing, which is covered by snow for the most part of the year.

The expedition team recorded 80 species of birds apart from the monals.

“Slater’s monal and Himalayan monal were earlier sighted from Sela and Mayodia in Arunachal Pradesh, but this is the first photographic record of these birds in Upper Siang. We could not get clearer photographs as the birds were 1.5 km away and difficult to reach,” Dr. Tamuk said.

“Sclater’s monal is an endemic bird of the Eastern Himalaya, mostly recorded from the junction of India, Myanmar, Tibet and Yunnan province of China. It is a high-altitude bird and rarely comes down below 1,500 metres,” said Daniel Mize, an assistant professor of zoology at the Rajiv Gandhi University near State capital Itangar.

“This pheasant is restricted to Arunachal Pradesh on the Indian side. Its total population is only about 10,000 and is thus listed in the vulnerable category of threatened species and is Scheduled I species of Wildlife Protection Act, 1972,” he added.