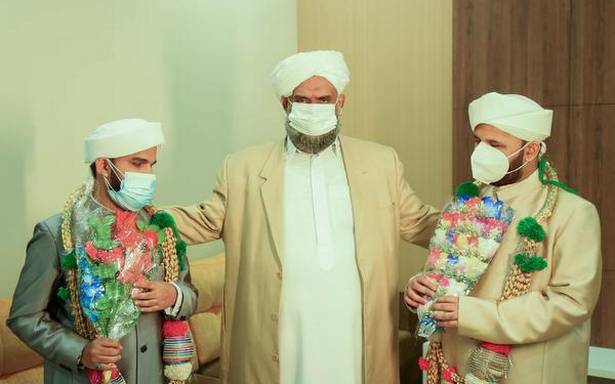 laurels to their alma mater by excelling in their fields.

Solemnising their nikah ceremony, Madin chairman Sayed Ibrahim Khaleel Bukhari described the occasion as the most beautiful in 23 years of Madin Academy’s history. “These nuptials will bring hope and inspiration to thousands of differently abled people in society,” said Mr. Bukhari.

The grooms, Jalaluddin Adani and Hafiz Thwaha Mahboob, have been students of Madin Academy. Torch-bearers of the Madin’s Able World programme, they both brought laurels to the campus by overcoming blindness.

Mr. Mahboob memorised the Quran and represented India in the Dubai International Holy Quran Award event, in which competitors from 160 countries participated. He is preparing for the world-famous seven-style Quran recitation.

Mr. Adani did his campus proud by showing exceptional proficiency in many languages, including French, Spanish, Arabic, and English. Winner of the UGC’s Junior Research Fellowship, Mr. Adani is preparing to pursue a doctoral programme in Arabic language.