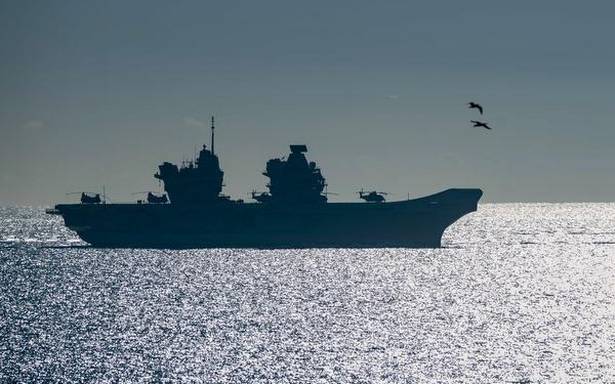 As part of its Indo-Pacific focus, the U.K.’s aircraft carrier Queen Elizabeth will sail to the Indian Ocean on its maiden operational deployment later this year and will also exercise with the Indian Navy.

“As a representation of the ‘Indo-Pacific tilt’ in the U.K.’s foreign policy, the HMS Queen Elizabeth Carrier, the largest ship ever built by the Royal Navy, will sail to India, Japan, South Korea, Singapore and the wider region,” the British High Commission said in a statement on Monday. “The UK’s Carrier Strike Group (CSG) 2021, led by HMS Queen Elizabeth, will sail to India in the autumn on its maiden operational deployment.”

The ship will conduct a series of joint exercises with Indian military forces in the Indian Ocean, “expanding our interoperability and enhancing our capabilities to defend against shared threats and protect our democratic values,” the statement said.

Throughout the deployment, the U.K. will support freedom of passage through vital global trading routes and demonstrate commitment to a recognised international system of norms and behaviours that benefit all countries, it said. “It will also help to establish a maritime partnership with India to support our mutual security objectives in the Indian Ocean.”

In a landmark review of its foreign, defence, development and security policy, published last month, the U.K. government committed to “becoming the European country with the broadest, most integrated presence in the Indo-Pacific in support of trade, shared security and values”.

The CSG will travel over 26,000 nautical miles from the Mediterranean to the Red Sea, from the Gulf of Aden to the Arabian Sea, and from the Indian Ocean to the Philippine Sea.

As part of deepening defence cooperation, India and the U.K. are close to signing a mutual logistics support agreement while the U.K. has expressed interest in posting a Liaison Officer at the Indian Navy’s Information Fusion Centre for Indian Ocean Region (IFC-IOR).

Britain has also offered India collaboration on development of sixth generation fighter technologies and the design of Queen Elizabeth for Indian Navy’s proposed second indigenous aircraft carrier which is yet to be approved by the government.