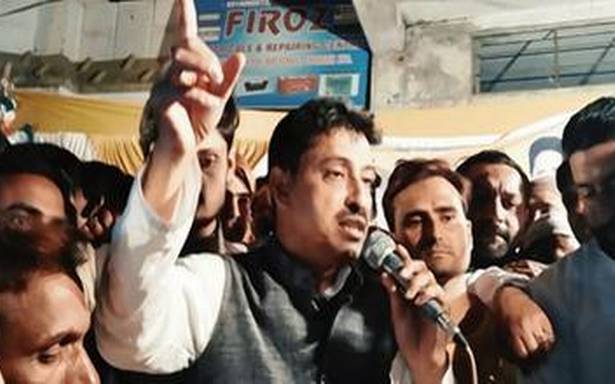 In a major setback to the Congress, Imran Masood, the party’s prominent Muslim face in western Uttar Pradesh, has switched camps and joined the Samajwadi Party (SP).

On Monday, after a massive show of strength, with supporters carrying him on their shoulders, Mr. Masood said, “We have decided to uproot the fascist government of the BJP, and only SP and its agenda of development can do it. Masood is not just a person. All my followers are reflections of Imran Masood. We will ensure that all the seven constituencies of Saharanpur go into SP’s kitty,” he said.

On his formal entry to the party, Mr. Masood said he would soon go to Lucknow and meet SP chief Akhilesh Yadav for further discussions. However, sources said he has already had one meeting with Mr. Yadav and Monday’s announcement was a mere formality.

Mr. Masood is said to have been crucial in the Congress’ victory in two of the seven seats in the Saharanpur district in the 2017 Assembly elections, with Muslims comprising around 42% of the electorate in the district.

A former Independent MLA from Muzaffarabad [renamed Behat after delimitation in 2008] Mr. Masood is the nephew of former Union minister and political stalwart of the region Rasheed Masood. He has been advocating a Congress-SP alliance some time, describing the latter as the only party that can stop the BJP in its tracks.

Seen as a polarising figure after his alleged hate speech against Narendra Modi during the campaign for the 2014 general elections, Mr. Masood’s move could have a major impact not only on the seven constituencies Saharanpur but also on the neighbouring districts.

Though he lost both the 2014 and 2019 Lok Sabha elections from the Saharanpur seat, Mr Massod received four lakh and two lakh votes respectively. In 2017, though he lost from the Nakur Assembly seat by only 4,000 votes, he ensured Congress victory in two other seats in the district — the party’s only success stories in western UP.

Also present at the meeting was Masood Akhtar, Congress MLA from Saharanpur Rural, raising speculations that he too might shift allegiance.

Interestingly, Mr. Masood is considered close to Congress leaders Priyanka Gandhi Vadra and Rahul Gandhi, with observers saying the party acknowledged his importance by making him a national general secretary of the All India Congress Committee and the AICC in-charge of Delhi. At Monday’s meeting, Mr Masood said he had the utmost respect for the Congress leadership but added that the party was not in a position to oust the BJP in the State.

It remains to be seen how the SP, which has not been highlighting its Muslim leaders like Azam Khan in these elections, would use Mr. Masood’s skills. Observers said he might not contest the elections but his appeal among the youth could be used to strengthen the SP, which won only one of the seven seats in the 2017 elections, against not just the BJP but also the AIMIM’s Asaduddin Owaisi, who is gaining traction in the region.

In a related development, an FIR was lodged by the Saharanpur Police against Mr Masood and nine others for violation of COVID protocol. Around 300 unidentified people have also been mentioned in the FIR that has been registered under sections 188, 269, 270, 171 of IPC, and 3/4 of the Epidemic Act.

Rajesh Kumar Singh Superintendent of Police, Saharanpur said the model code of conduct was in place and COVID 19 was on a surge. “Mr Masood had not sought permission for the meeting at his residence in which hundreds of his supporters turned up without masks and social distancing,”he said.