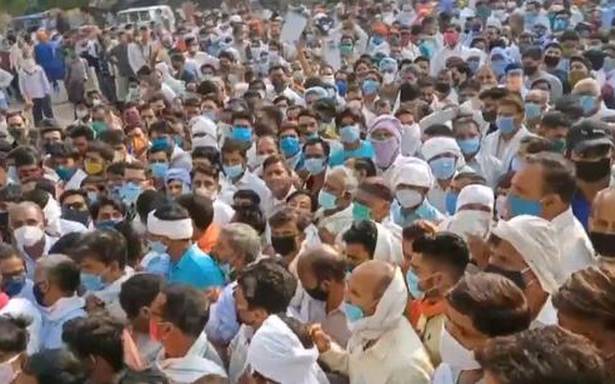 In some districts, supporters of the candidates also assembled near the centres in large numbers despite warnings by the State Election Commission

Social distancing norms to curb the COVID-19 infection appeared to go for a toss in Uttar Pradesh’s centres where votes for the panchayat polls are being counted on Sunday.

Visuals from various districts such as Azamgarh, Siddharthnagar, Jaunpur, Sultanpur, Amethi, Jalaun, Fatehpur, Gonda and Sitapur showed a large number of people gathering outside or lining up at the gates of the counting centres in close physical proximity to each other. People were seen very close to each other in the long queues.

In some districts, supporters of the candidates also assembled near the centres in large numbers despite warnings by the State Election Commission (SEC).

Police also restored to use of lathis at some places to manage the crowd. In Firozabad, police resorted to lathicharge after polling agents gathered in large numbers. In some cases, people assembled at the centres could be seen wearing masks in an improper manner while in general people appeared to be wearing masks or covering their faces with ‘gamchas’.

The SEC had instructed officials on the ground to ensure that no crowd gathered outside counting centres under any situation and that polling agents be allowed inside following physical distancing norms and after proper sanitisation.

The Uttar Pradesh Shikshak Mahasangh, a federation of teacher unions, on Saturday evening had called off its decision to boycott the counting process after assurances by the State government and the SEC that COVID-19 safety norms would be followed strictly. This came after the Supreme Court allowed the counting on May 2 amid calls for boycott by various teacher unions.

The Mahasangh claimed 700 teachers on polling duty during the panchayat elections had died after testing positive for COVID-19 and raised concerns about the lack of protocol and facilities.

Dinesh Chandra Sharma, president of the U.P. Basic Shiksha Parishad, said on Sunday, “The U.P. government while appearing in the Supreme Court gave all assurances about following the laid down COVID-19 Safety guidelines but [the guidelines] have been torn to shreds.”

The counting went on as per schedule despite some BJP lawmakers from U.P. and teachers unions demanding that they be deferred by at least a month owing to the COVID-19 situation in the State where various districts have reported shortage of oxygen and inability to arrange hospital beds in time.

The counting could lead to a “super explosion” of COVID-19 cases in the rural areas, BJP MLA from the Sawaijpur seat in Hardoi district Madhvendra Pratap recently wrote to Chief Minister Yogi Adityanath.

On Saturday, U.P. recorded 303 new deaths due to COVID-19 and currently has over three lakh active cases.