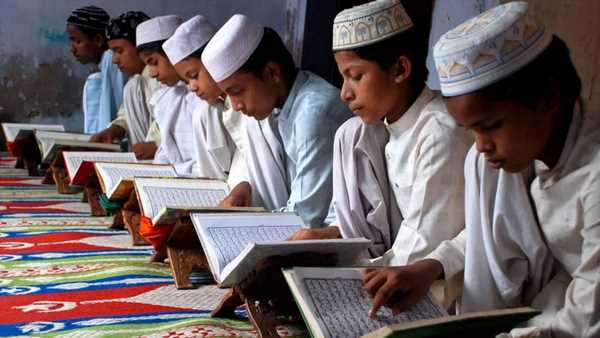 With the Uttar Pradesh government set to conduct a survey of private madrassas, proprietors of the theological schools fear that their institutions may be declared illegal and ‘run over by bulldozers’.

According to sources, the fear was expressed by them on September 6 in New Delhi at a meeting of the Jamiat Ulema-e-Hind, one of the leading organisations of Islamic scholars belonging to the Deobandi school of thought.

However, state minister Danish Azad Ansari said the apprehension has no basis.

The Muslim body’s president Maulana Arshad Madani told PTI, “Nobody has any objection if the government wants to conduct a survey of private madrassas but care should be taken so that it doesn’t interfere in their internal matters.”

The sources said it was decided at the meeting that views of the Muslim community will be placed before the government, a close eye will be kept on the exercise and a steering committee be formed to protest any wrongdoing.

It was also decided to hold a meeting on September 24 in Darul Ulum Deoband to chalk out the future course of action.

Earlier, All India Majlis-e-Ittehadul Muslimeen chief and Hyderabad MP Asaduddin Owaisi and Bahujan Samaj Party supremo Mayawati had raised questions over the exercise, for which teams were to be formed by September 10.

The government has maintained that the exercise is aimed at streamlining private religious seminaries so that students there could learn science and computers.

BSP supremo Mayawati has alleged that the government is trying to interfere in the internal matters of the seminaries with an intention to ‘terrorise’ Muslims.

Meanwhile, UP’s Minister of State for Minority Affairs Danish Azad Ansari assured that no centre will be razed.

“Those expressing such an apprehension should tell if any madrassa was brought down by any bulldozer in the previous five years of the state government. The anxiety has no basis,” he told PTI.

The lone Muslim minister in Yogi Adityanath government said the state government is working honestly to bring madrassas into mainstream.

“The purpose of the survey is to know the actual condition of the madrassas and help these in lifting their standard,” he added.

The minister said during the survey, owners of private madrassas will be asked as to which schemes of the government they wanted.

They will also be given information about development programmes run by the government for minorities.

“Relevant papers and forms regarding schemes for minority communities will be made available to them during the survey so that welfare schemes reach villages and towns deprived of them till now,” Ansari said.

Ansari asked critics to stay away from politics ‘if they are supporters of Muslim upliftment’.

All-India Muslim Personal Law Board member and Lucknow city Qazi Maulana Khalid Rasheed Farangi Mahli too criticised Owaisi for dubbing the survey as “mini NRC” and said everything should not be politicised.

He, however, said before carrying out the survey of private madrassas, the state government should strengthen the arrangements in government-affiliated madrassas and a similar survey be conducted in every primary schools run by the government.

The Uttar Pradesh government had on August 31 taken the decision to conduct the survey to assess basic facilities available in private madrassas.

There are 16,461 such theological schools in Uttar Pradesh at present, of which 560 are registered with the government and getting financial assistance.

Teams formed for the survey will include the deputy commissioner, district basic education officer and the district minority welfare.

They will complete the exercise by October 15.

The DMs should hand over the reports to the state administration by October 25.

Sources said basic information like the name of a madrassa, its owner, whether it is run from a rented premises, number of students enrolled, arrangements of drinking water, toilet, power supply and furniture will be collected.

It will also seek information about the number of teachers is every theological schools, syllabus followed, source of income and whether the institutions are linked with any NGO.