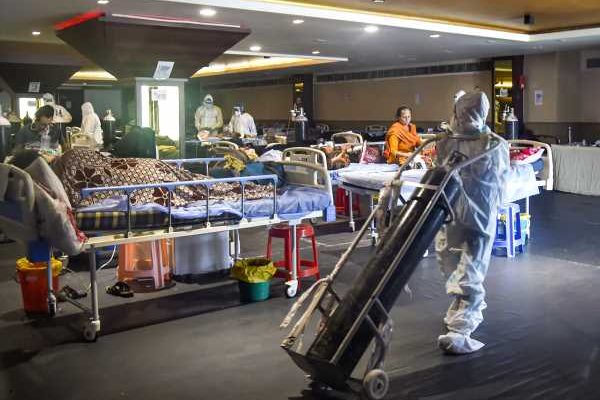 ‘This experience is horrifying. Doctors need psychiatrists to handle the trauma they are going through in the face of this pandemic’

Tanuj Chauhan, a 25-year-old residential medical officer at Metro Hospital in Gurugram, has lost six patients under his supervision in April.

As he struggles to find the strength to put on a brave face and provide moral support to his patients, the young doctor who is barely a year into the profession, says, “The situation is very critical. I can see the faces of the patients whom I have lost to this virus.”

Treating Covid patients, providing them the emotional support to help keep them calm while also dealing with the constant fear of contracting the infection are some of the many battles that Chauhan has been fighting since he got his medical degree in August 2020.

“Whenever patients are admitted to the Covid ward, there is only fear in their eyes. And our job, as health professionals, is to not only give them medical care but also emotional support,” says Chauhan, adding, “Since the patients do not get to see their families, we act as one.”

But like most health workers, he has avoided meeting his own family for months for the sake of their safety.

With the number of Covid cases touching highest-ever levels in April, the pressure on doctors like Chauhan is mounting.

Harjit Singh Bhatti, a doctor at Delhi’s Manipal Hospital, finds himself unable to help even his family and colleagues.

“There are no beds available in Delhi. We have had to turn people away,” he says. “It is a situation no doctor wants to be in, but what choice do we have?” He is upset, helpless — and angry.

A senior doctor at Delhi’s Lok Nayak Jai Prakash Narayan Hospital, better known as LNJP hospital, has shifted her parents who lived with her to a different house for their safety.

“It’s a war going on, and we are fighting it without ammunition,” she says.

Though the government is claiming to provide sufficient beds and oxygen supply in Delhi, the doctor says, “I don’t have enough beds here. There is no oxygen either. People are calling me for oxygen, but I don’t know where to get it from.”

Hospitals in various cities are warning of a collapse of infrastructure, with people struggling to find beds and oxygen cylinders.

With the situation desperate, some doctors have taken it upon themselves to help arrange for oxygen for their patients.

Kiran Dave, a vascular surgeon in Ahmedabad, is among many who are running from pillar to post to help their patients.

“We have been trying to get a bed since morning, but every hospital is at its full capacity,” he says.

The frustration and helplessness evident in his voice.

“We were forced to give oxygen to a patient in his car through a portable cylinder,” he added.

In Delhi, Bhatti receives hundreds of queries from people asking about the availability of oxygen, beds, plasma and Covid medicines.

He assesses their condition and if it isn’t serious, he recommends home treatment.

“People constantly ask for beds and oxygen because they do not want to lose their loved ones,” he says.

“As I listen to their pleas, I think of my wife and bedridden mother, who is a cancer patient. I have not seen them for the past six months,” he added.

The scene in Mumbai, India’s financial capital, isn’t any different. Sandip Rane, a cardiologist at Rane Hospital, says the surge isn’t unexpected, but he found it shocking that people forgot the pandemic wasn’t over yet.

Maharashtra has the highest number of active Covid cases in the country.

What also agitates the doctors is the administration’s failure in implementing Covid safety protocols.

“Not just as a doctor but as a citizen I feel the administration has failed us,” says Rane, adding that the huge congregations at election rallies and the Kumbh Mela have broken the already exhausted healthcare system.

“Policymakers have the power to save millions of lives. But it seems their priorities aren’t right,” says Bhatti, adding how disheartening it is for doctors to see policymakers focused on publicity rather than the emergency at hand.

As they cope with an overstretched infrastructure, the doctors are also dealing with fatigue, anxiety and a feeling of guilt at failing to save lives despite doing their best in the circumstances.

While it is not uncommon for doctors to see patients die, not being able to help a patient is a burden on the soul, says Rane.

The 62-year-old doctor does not see the Covid curve flattening in the foreseeable future.

“This experience is horrifying. Doctors need psychiatrists to handle the trauma they are going through in the face of this pandemic,” he says.

“The number of daily patients is still very high. Until the case surge eases, the situation will be difficult to handle.”

The health infrastructure needs time to breathe — as do the doctors.

“Until that happens,” says Dave, “we have to brace ourselves for the worst.”