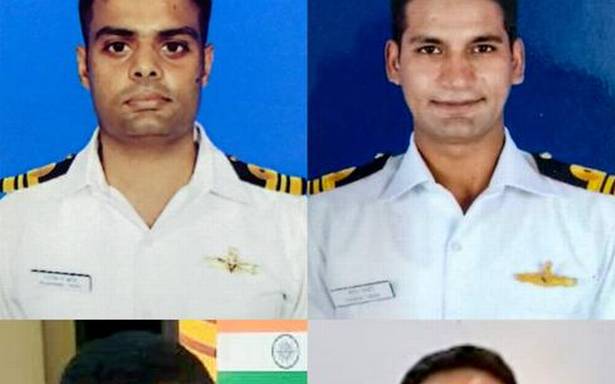 Search is under way for two other members of the team

The bodies of four Navy mountaineers, who went missing after getting caught in an avalanche near the summit of Mount Trishul in Uttarakhand, were brought to Joshimath from Chamoli district on Sunday.

Officials said the mortal remains will be sent to their native places after a post-mortem.

In a tweet, the Army’s rescue team said the four bodies were brought to Joshimath from the peak of Mount Trishul in helicopters on Sunday morning.

The bodies of Lt. Cdr. Rajnikant Yadav, Lt. Cdr. Yogesh Tiwari, Lt. Cdr. Anant Kukreti and MCPO Hariom have been kept at the Army camp in Joshimath, it said.

Five mountaineers of the Navy and one porter went missing early on Friday morning after getting caught in the avalanche.

One of the mountaineers and the porter are still missing. A search is under way to find them.

According to the officials, search and rescue operations could not be carried out on Friday due to bad weather. The four bodies were spotted by the rescue team on Saturday and retrieved on Sunday.

Principal of the Nehru Institute of Mountaineering (NIM) Colonel Amit Bisht, who is leading a team of rescuers, said the Navy, in coordination with the district administration of Chamoli, will conduct the post-mortem of the mountaineers in Joshimath. After this, the bodies will be sent to their native places.

According to the officials, a 20-member team of mountaineers of the Navy had embarked on the expedition a fortnight ago to reach the summit of the 7,120-metre Mount Trishul. After the five mountaineers and the porter went missing in the avalanche, the remaining team members stopped the campaign and returned to their camp.

The NIM, the High Altitude Warfare School, the IAF, the Army and the State Disaster Response Force are carrying out the search and rescue operation.