Dhami is seen as being close to Koshiyari, having served as his advisor and Officer on Social Duty in 2001-2002 when the latter was CM. Sources say Dhami is the man Koshiyari trusts the most in Uttarakhand. 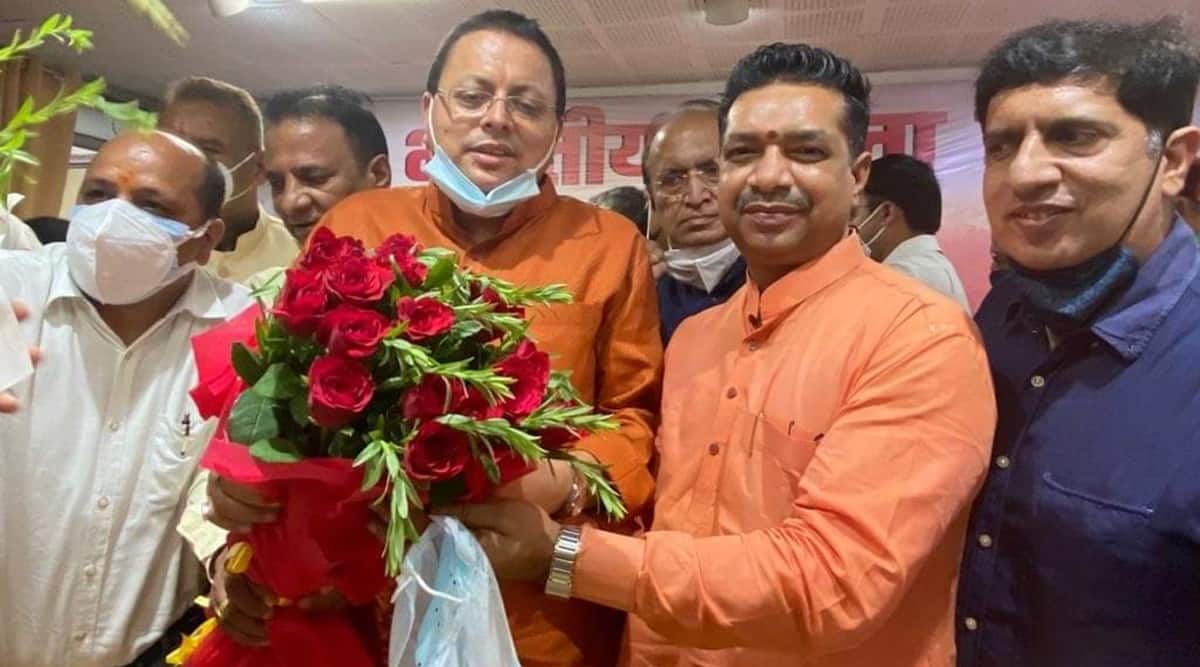 The new Chief Minister of Uttarakhand, Pushkar Singh Dhami, is relatively young with just two terms in the Assembly. However, he has been associated with the RSS for more than three decades — a factor that would have tilted the scales in his favour as the BJP sifted through claimants to replace Tirath Singh Rawat.

He is also believed to have the blessings of former CM and current Maharashtra Governor Bhagat Singh Koshiyari, among the many power centres in the faction-ridden Uttarakhand BJP.

Born in a middle-class family of Pithorgarh district, Dhami, 45, started his association with the Sangh at a young age. As a college student, he spent 10 years in the ABVP, working with the RSS students’ wing at Lucknow University and other educational institutions in Uttar Pradesh.

A post-graduate in human resource management and industrial relations, Dhami proceeded to the BJP Yuva Morcha, and for two terms between 2002 and 2008, he was its Uttarakhand president. BJP Chief Ministers Ramesh Pohkhriyal Nishank and Maj Gen BC Khanduri (retd) both had Dhami as vice-chairman of the Urban Monitoring Committee with the rank of state minister.

In 2012, the BJP gave him ticket from Khatima in Udham Singh Nagar district, and he won. Since 2016, he has been state vice-president. When Dhami again won as an MLA in 2017, he was widely tipped to get a ministerial post under Trivendra Singh Rawat, but was left out.

Given that, Dhami was a surprise pick on Saturday. Among the names that had been doing the rounds to replace Tirath Singh Rawat, who had to step down after just four months as CM, were several more senior MLAs including Cabinet ministers, former CMs and parliamentarians.

Dhami is seen as being close to Koshiyari, having served as his advisor and Officer on Social Duty in 2001-2002 when the latter was CM. Sources say Dhami is the man Koshiyari trusts the most in Uttarakhand.

BJP leaders believe Dhami’s “young and energetic” image would help the party fight anti-incumbency as well as the Opposition’s accusations of political instability. The BJP has had three CMs in four months.

“Dhami worked as youth wing president for eight years. Those who worked in his team at that time are now in mainstream politics. This support can help him galvanize the cadre, who have become relaxed since senior leaders did not move out due to the pandemic,” a party leader argued.

As president of the state BJP youth wing, Dhami had staged protests against unemployment. Speaking to mediapersons after meeting Governor Baby Rani Maurya Saturday, Dhami said generating job opportunities for youths will be his target as CM.

The other factors that worked in Dhami’s favour is that he is a Thakur from the hill area and has worked in Khatima of Kumaon region. In Uttarakhand, votes are divided between Kumaon versus Garhwal regions, Thakurs versus Brahmins, and hills versus plains. Dhami helps the BJP maintain caste and regional balance, with BJP state president Madan Kaushik being a Brahmin from Haridwar, which is a plain area in Garhwal.

In comparison, outgoing CM Tirath Singh Rawat is a Thakur from Garhwal.