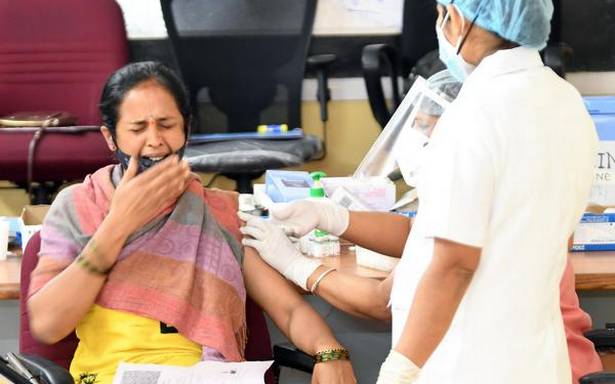 Although the Centre has announced that vaccination for people in the 18-45 years category will be rolled out from May 1 and has also opened up registrations on the CoWIN portal, it is not likely to begin before mid-May in Karnataka.

Chief Minister B.S. Yediyurappa on Thursday announced that the fourth phase of the vaccination drive would be taken up “in stages” in the State.

Pointing out that pharmaceutical companies were enhancing their production capacity to meet the increased demand, the Chief Minister’s statement said a third vaccine (apart from Covishield and Covaxin) was also being introduced in the country. “Under these circumstances, the vaccination drive will continue based on the availability of vaccine. The drive will be planned to ensure systematic, disciplined, and smooth implementation,” he said.

Mr. Yediyurappa also said that while the State had managed to overcome the first wave with minimal losses, the second wave was “testing our capacity”.

Official sources said that vaccine manufacturers had made it clear that they could negotiate future orders only after meeting their prior vaccine commitment to the Union government.

So far, the Centre has supplied 99.4 lakh doses of vaccine to the State, and 93.5 lakh doses have been administered. “The State as of now has a stock of 5.9 lakh vaccine doses, which is required to administer the second dose. There is no stock to start the fourth phase on May 1. The manufacturers have made it clear that they cannot deliver the State’s new order before mid-May,” a senior health official said.

However, Health Commissioner K.V. Trilok Chandra said the date of rollout would be announced on Friday. “We are working out the modalities of rolling out the fourth phase and plan to start it as early as possible,” he said.