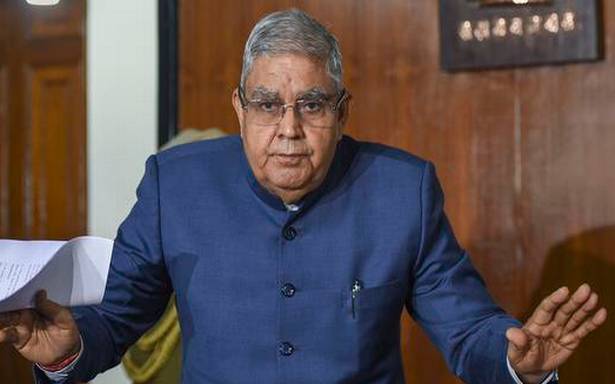 West Bengal Governor Jagdeep Dhankhar on Thursday said that the State government has appointed Vice Chancellor of 24 universities without his approval.

“VCs of 24 Universities appointed @MamataOfficial in disregard of law. These are ex facie in defiance of specific orders or without approval by Chancellor-the Appointing Authority. These appointments carry no legal sanction and would be forced to take action unless soon recalled,” Mr. Dhankhar said.

In another development a ward of words erupted between Governor Dhankhar and Trinamool Congress MP Saugata Roy. The MP had said that the Governor Dhankhar has been sending him messages against Chief Minister Mamata Banerjee every day.

On Thursday, Governor Dhankhar made public communication between the two. “Found it compulsively imperative to lay bare entire documentation to put to media version this end,” the Governor said.

“The least expectation @SaugataRoyMP @LokSabhaSectt @AITC is to withdraw his statement “Governor Sending Me Texts Against Mamata Banerjee Every Day” now that entire WhatsApp exchange has been revealed,” Mr. Dhankhar added.