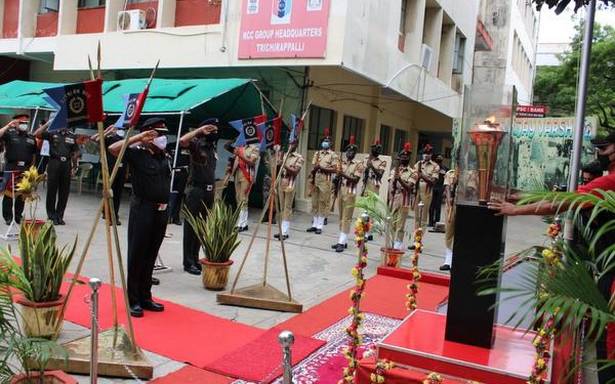 Victory Flame lit from the eternal flame at the National War Memorial by Prime Minister Narendra Modi to commemorate 50 years of India’s victory over Pakistan in the December 1971-war arrived here from Madurai on Sunday.

The ‘Mashaal’ (Victory Flame) is being carried to various parts of the country, including villages of awardees of Param Vir Chakra and Maha Vir Chakra, who had made supreme sacrifice in the war. The Swarnim Vijay Varsh is being celebrated throughout the country to kindle the spirit of victory.

The Rockfort NCC Group commemorated this event in a grand manner here on Sunday. The Victory Flame was received at the NCC Group Headquarters in Kallikudi by Commanding Officer, 4 TN Girls Battalion NCC. All officers of NCC Battalions, Junior Commissioned Officers/Non Commissioned Officers and NCC cadets lined up on the road as a mark of respect, and a Guard of Honour was given. A wreath laying ceremony was conducted to pay tributes to the martyrs. The event was presided over by Colonel C. Elavarasan, Group Commander, Rockfort NCC Group, Tiruchi. NCC cadets from various units witnessed the event, a release said.

The Victory Flame was thereafter taken to the World War Memorial in Tiruchi, St. Joseph College and National College to create awareness among the people. At National College, Principal Squadron Leader R. Sundararaman received it. The Flame was placed on the college campus and the NCC cadets gave a Guard of Honour. NCC cadets of various colleges and staff members attended the function. The Victory Flame will depart from Tiruchi on Monday on its way to the Air Force Station in Thanjavur.