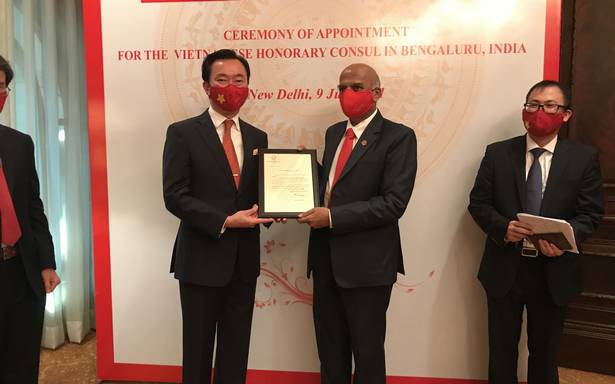 As part of Vietnam’s efforts to deepen cooperation with various States, industrialist N.S. Srinivasa Murthy, based in Bengaluru has been appointed as Honorary Counsel General of Vietnam for Karnataka.

“He is the first Honorary Counsel General of Vietnam from India and the 19th across the world. He is the third Counsel General to be appointed globally this year,” said Vietnamese Ambassador in India Pham Sanh Chau, addressing a small gathering amid COVID protocols. The appointment is for a period of three years.

Mr. Murthy is the owner and managing partner of N. K. Subbiah Setty & Sons which is into manufacture of agarbattis (incense sticks) since 1932.

Mr. Pham said that there were five recommendations and after an extensive screening process by at several levels in the Vietnamese government, Mr. Murthy was approved. This is the end of five year long journey of the Vietnamese embassy to look for a genuine and worthy honorary counsel in Bengaluru with the jurisdiction for Karnataka, he stated.

Stating that they are looking for honorary counsel generals for five States and this was the first one approved, Mr. Pham said this is a very serious decision by the government of Vietnam to find a person who can represent well the image of Vietnam in Bengaluru and then help to protect the interest of Vietnamese nationals as well as companies. Also to promote trade, economics, investment, tourism, educational and cultural cooperation between Vietnam and Karnataka, he stated.

On the Vietnamese interest in Karnataka, the envoy said they want to have a direct flight between Bangalore and Vietnam and also want to make Bangalore the hub for technology for Vietnam.

Speaking at the event, Mr. Murthy said his endeavour will be to promote trade between Vietnam and South India and in particular Karnataka. “I will strive to improve the national branding of Vietnam in all spheres…,” he stated.