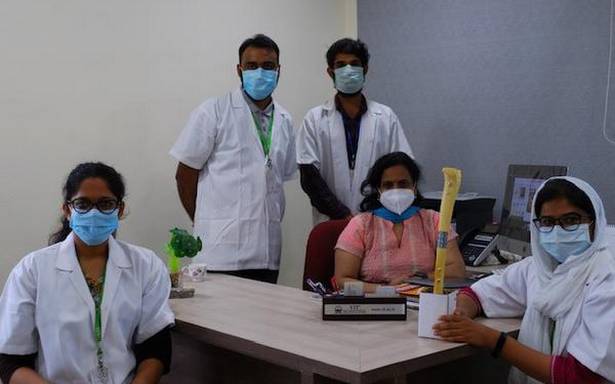 They competed against 250 teams in over six months

A team of researchers from the Centre for Biomaterials, Cellular & Molecular Theranostics (CBCMT) at Vellore Institute of Technology (VIT), Vellore, has been declared the winner of MaterialNEXT 2.0 in its second edition that was hosted by TATA Steel recently.

According to a press release, the Tata Steel Advanced Materials Research Centres (TSAMRC) has been actively associating with young college talents through their ‘Campus Connect’ programme and MaterialNEXT, which is an open innovation Pan-Indian event to identify budding research talents and materialise potential ideas.

Team ‘Titans’ from VIT, Vellore, mentored by the Director and Senior Professor Geetha Manivasgam of CBCMT, comprises of interdisciplinary research scholars Pearlin Hameed, Ansheed Raheem, G. Aswin and R. Jishita. They had bagged a cash prize of ₹5 lakh after marking a prolific win in the grand finale.

After four screening levels, the team secured their final spot, competing against 250 teams from across India over six months amid the pandemic restrictions. In the finale, they were challenged by runner-up ‘Team Changemakers’ from the Indian Institute of Science (IISc), Bangalore, and three other teams from IISc-Bangalore, IIT-Guwahati, and IIT-Gandhinagar.

The VIT team innovated by designing and developing a novel 3D printed porous Titanium alloy that nearly mimics the properties of natural bone in contrast to conventional titanium alloys that are currently used. This would significantly alleviate many post-surgical complications, which otherwise contributed to implant failure. Currently, the Indian medical sector uses imported implants for bone repair, which is a cross to bear for an average Indian and a near-to-impossible luxury for the underprivileged. This innovation is expected to churn out indigenous porous bone grafts, plates, fixtures, screws, and dental implants, with superior bio compatibility and an affordable price tag, it added.