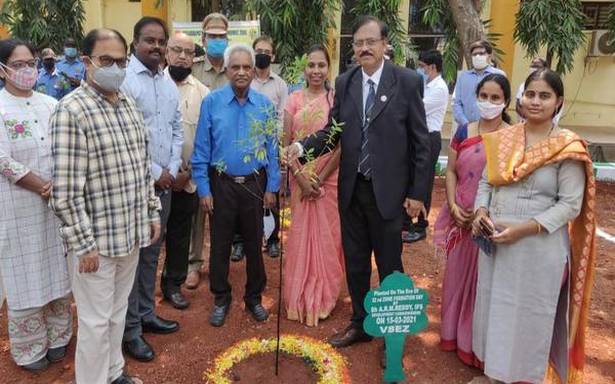 ‘The zone standing first in the country in terms of growth’

The 32nd Zone Formation Day of Visakhapatnam Special Economic Zone (VSEZ), which has jurisdiction over the SEZs in A.P., Telangana, Chhattisgarh and the union territory of Yanam, was celebrated at the VSEZ premises at Duvvada here on Monday.

VSEZ Development Commissioner A. Rama Mohan Reddy appreciated the stakeholders for helping the zone achieving the landmark exports of ₹1 trillion during 2020-21, breaking all the records of the past 32 years and standing first in the country in terms of growth.

The first Development Commissioner of VSEZ G. Venkanna was felicitated for his contribution in the initial phase. The representatives of units, which contributed exceptionally to exports from the VSEZ during the year, were presented mementoes. The units, which successfully implemented the Clean and Green concept (Swachhata) and the officials, who have rendered commendable service, were also honoured. A few saplings of sandalwood were planted to mark the occasion.

Mr. Reddy said that VSEZ was set up at Duvvada in Visakhapatnam as an export processing zone, owned by the Union government. Popularly known as VEPZ (Visakhapatnam Export Processing Zone), it was set up over 360.5 acres of land on March 15,1989.

Speaking on the performance of VSEZ during the lockdown, he said, software and services sector contributed to 66% and pharma and biotech 20%. M/s Laurus labs of APSEZ exported 11.47 million hydroxychloroquine tablets to USA, South Africa, Singapore, Malawi etc., he said.