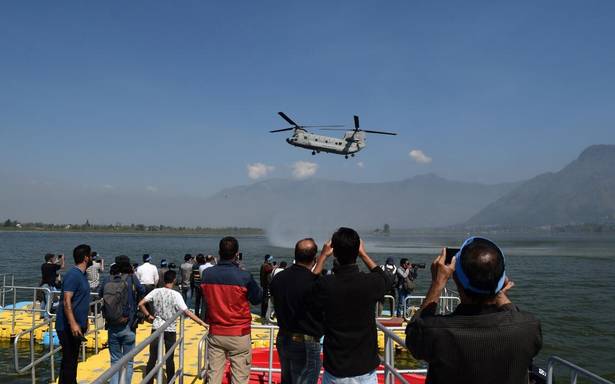 A video on the ‘Give Wings to Your Dream’ show organised in Srinagar.

After a gap of 14 years, locals in Srinagar were treated to an air show by the Indian Air Force.

Jets performing aerial acrobatics and awe-inspiring maneuvers in the skies, mesmerised hundreds of students drawn from different schools in the Valley.

The Indian Air Force jets skillfully navigated and synchronised while hovering over the famous Dal Lake.

The show named ‘Give Wings to Your Dream’ was organised as a part of the ‘Azadi ka Amrit Mahotsav’.

The aim of the air show was to motivate youth to join the Air Force and to promote tourism in the region.

Visitors saw a display by the Indian Air Force’s Suryakiran aerobatic team which has enthralled crowds across the country with their hair-raising manoeuvres using their aircraft in red and white.

The Surya Kiran team has completed 25 years this year.

The skies above Dal Lake were also privy to displays by the Paramotor and powered hang-glider teams, flypast by the MiG-21 Bison and aerobatics by the Su-30 Aircraft.

The show also included the Akashganga skydiving display, the Indian Air Force symphony orchestra display and a photo exhibition depicting the history of the organisation.

The Indian Air Force’s air shows are a regular feature in venues across the country like the Aero India show held in Bengaluru’s Yelahanka Air Force Station every year.