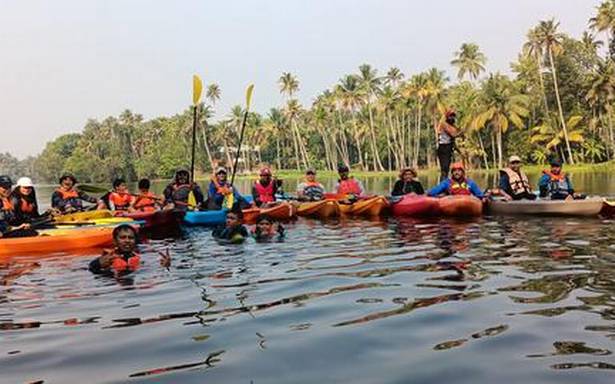 Trainers peeved at most youths in Kerala not knowing swimming

floods, landslips, and other disasters that have been rocking Kerala of late and the State’s increasing vulnerability to them have made youths and others enrol for training in swimming and adventure sports, lest they should be caught napping.

Watersport enthusiasts, clubs, and academies that impart training in swimming, paddling, kayaking, and other activities have been kept busy, especially after what was termed as the ‘deluge of the century’ of 2018.

“The floods were an eye-opener, since realisation dawned that most deaths due to drowning could have been prevented, had the victims known swimming,” said Wg. Cdr (retd.) Unnikrishnan Palat, a 72-year-old Indian Air Force veteran who is also a skydiving enthusiast-cum-trainer. He trained an emergency response team at Erattupetta following last week’s floods. A similar training session at Bharananganam is set to follow suit as part of the State Government’s efforts to raise Emergency Response Teams in various panchayats.

“Apart from its health benefits, swimming, which can be learned in a day’s time, is a must-know for the people of Kerala which is surrounded by sea. I train hundreds of people, including IT professionals, every year in swimming and water-based adventure sports. Most rivers and beaches in the State have immense potential for watersports. It is sad that youths are unaware of it,” he said.

According to him, the Kerala Tourism has failed to sustain the initial momentum of adventure tourism activities. Parents and schools should take the lead in helping children shed inhibition for watersports. It is better to train youths in disaster management, since local interventions can save substantial number of lives, well before Government teams arrive, he added.

The latest to join the league of organisations promoting watersports / kayaking is Cochin Paddle Club, whose inauguration is slated for Saturday. Cdr. Abhilash Tomy, the first Indian to complete a solo, non-stop circumnavigation of the world, will be the chief guest. “Watersports are good for protecting oneself and others during disasters like floods. Such activities will also wean youth away from drug use and bring them close to nature, making each of them a stakeholder in the conservation of waterbodies. In Kochi, we have mapped launching points for such activities in different waterbodies,” said Nommy Paul, president of the club.