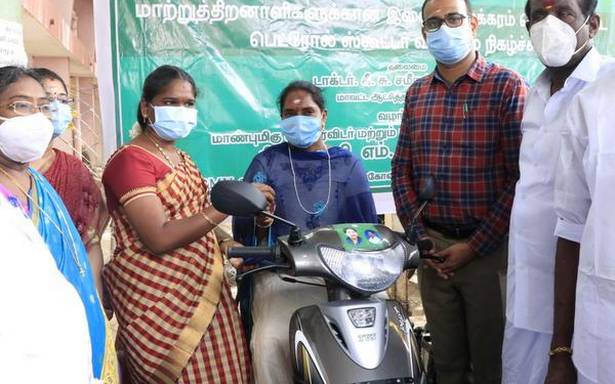 ‘Govt. has been taking care of the needs of the downtrodden, working class’

Addressing the gathering, she said the government had been taking care of the needs of the downtrodden and the working class in all possible ways. Irrespective of the rise in price of gold, the ambitious project, Thaaliku Thangam, had been successfully implemented across the State by the government.

The Minister said 527 women received 4.2 kg of gold worth ₹2.03 crore on Sunday. The objective of was to ensure that even those families below poverty line (BPL) were able to give their daughters gold as the mangal sutra at the time of marriage. The late Chief Minister Jayalalithaa had devised the scheme by giving four gm and eight gm to girls who had completed plus two and undergraduate.

Apart from the thaaliku thangam, Ms. Rajalakshmi gave away two-wheelers to 162 women, who received a subsidy component to the tune of ₹40.50 lakh.

She explained that many working women from the lower class in the economy spent a major part of their earnings on transport. Hence, in a bid to help them save money, the government offered one-third sum as subsidy that would enable womenfolk to purchase a new two-wheeler on easy loan terms and repay without hassles.

She also gave away free house site pattas and cycles, among others, to the beneficiaries.

Later, the Minister participated in the bhoomi puja for construction of the Tahsildar office at Sankarankoil, which would be built at a cost of ₹2.77 crore.