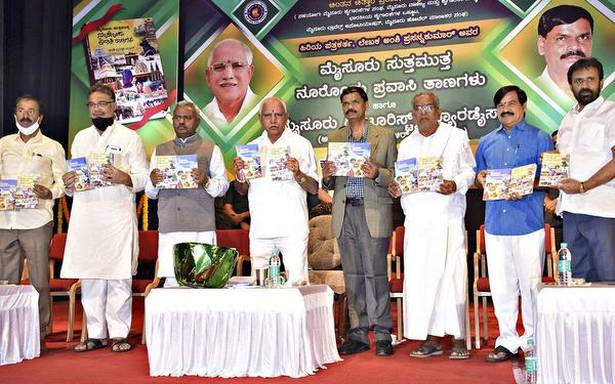 Chief Minister B.S. Yediyurappa on Saturday said his government was spending nearly ₹5,000 crore on developing the State tourism sector. He said the investment was expected to help generate around 30 lakh jobs.

Speaking after releasing the books of senior journalist Amshi Prasanna Kumar – “Mysuru Sutta Mutta Noorondu Pravasi Thanagalu and Mysuru The Tourist Paradise (translated to English by Dr. R Nagabhushan), at a programme here, he said the government was committed to developing and promoting tourism in the State. Karnataka was being promoted as a preferred tourist destination with the tagline as ‘One State, Many Worlds’, he added.

Mr. Yediyurappa said the Karnataka Tourism website had received over 10.5 crore hits, describing the potential of the State’s tourism attractions and the interest shown in those sites by the domestic and international tourists.

Addressing the gathering, Mr. Yediyurappa said nearly 160 works had been completed across various tourist destinations and added that the State tourism sector had won international awards, including an award from Denmark for Padubidri beach. Disclosing that the State’s top tourist sites such as Hampi, Belur, Halebid, Badami, Pattadakal and others were being promoted as international tourist destinations, the Chief Minister said Mr. Prasanna Kumar’s works on tourist sites of Mysuru would support the ongoing initiatives for promoting tourism in the region.

Earlier, Kannada Book Authority Chairman Nandish Anche, who spoke about the works, said many tourist sites that had gone unnoticed needed development and promotion. Several such sites had the potential to emerge as new attractions, attracting footfall, if efforts were made to bring them on the State tourism map.

He urged the government to consider developing a mobile application on the lines of the one developed for knowing the survey number details of the land by the person operating the app standing on the particular land, so that tourists get all details when they were on a tour of those attractions. “Even if brief details are available, it will go a long way in developing tourism if accurate information is easily accessible,” he felt.

Minister in charge of Mysuru district S.T. Somashekar, who presided, spoke on the steps taken by the government for promoting tourism and congratulated Mr. Prasanna Kumar for bringing out the books in the interest of tourism in Mysuru region. S.A. Ramdas, Tanveer Sait, and L Nagendra, MLAs, former MLA and MIA president Vasu, Mysuru Kannada Sahitya Parishat president Y.D. Rajanna, and Ningaraj Chitttanavar of Chintana Chittara were among those present.