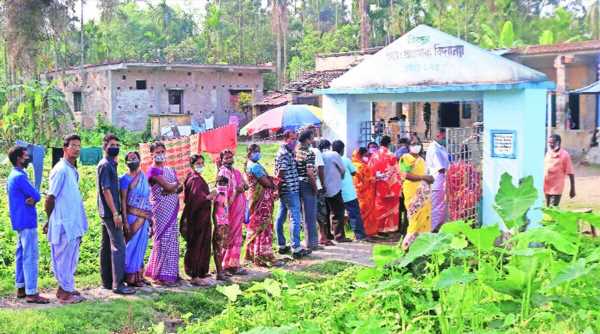 Despite incidents of violence, West Bengal recorded 77.68 per cent turnout by 5 pm on Tuesday during the third phase of the polling.

Voting in 16 seats of South 24 Parganas district saw 76.92 per cent turnout, while 77.93 per cent votes were cast in seven seats in Howrah and 79.36 per cent in eight Assembly segments in Hooghly district, the Election Commission said.

Chief Minister and TMC supremo Mamata Banerjee, however, alleged “blatant misuse” of central forces to “influence voters”. “The blatant misuse of Central forces continues unabated. Despite us repeatedly raising this issue, @ECISVEEP continues to be a mute spectator, while men in uniform are being misused at several places to openly intimidate TMC voters and influence many to vote in favour of one party,” she tweeted.

Addressing a public meeting in Alipurduar district, the TMC chief accused the Election Commission of turning a blind eye to the “excesses” of the CRPF, CISF, BSF and the ITBP. “They are beating and torturing people since morning. They are saying BJP ko vote do (vote for the BJP),” the Chief Minister said.

“They have asked the CRPF to help BJP goons to capture booths. The BJP is running elections through guns. Even Donald Trump has not gone to the extent of Narendra Modi,” she said.

Banerjee asked the women voters to file a police complaint if they face any harassment by central forces.

The TMC, meanwhile, alleged that a CRPF man was caught molesting a girl in Tarakeswar in Hooghly district. He was beaten up by the residents before being rescued by the police. “This incident is unforgivable. In fact, there have been several incidents where personnel of central armed forces have been found intimidating voters to vote for the BJP,” TMC MP Derek O’Brien said.

ADG (Law and Order) Jag Mohan said that an FIR has been registered and police are probing the case.

At least one person was injured when crude bombs were lobbed outside a polling station in the Canning Purba Assembly seat. TMC candidate Shaukat Mollah accused Abbas Siddiqui-led Indian Secular Front (ISF) of having organized the attack, a charge denied by the party.

In some of the seats in South 24 Parganas, TMC and ISF candidates clashed in some areas, including the Mandirbazar area, where 12 persons were injured.

In the Dhanekhali seat, state minister Asima Patra accused central forces of high-handedness and alleged that voters were stopped by BJP “goons” from reaching polling stations, an allegation dismissed by the BJP.

In Durbrajpur, clashes broke out between the BJP workers and the police after the latter tried to recover the body of a party worker found this morning.

“Apart from sporadic incidents of violence, polling was conducted peacefully… We respect all our stakeholders, our central forces, police and polling officers. However, whenever there are allegations, we enquire that and take corrective measures,” Aftab said.

The Election Commission has sought a report of an incident in Bishnupur in South 24 Parganas, where a woman was threatened while she was going to cast her vote. The video was widely shared after which the poll panel sought a report in the case.

As per the Election Commission, 30 poll observers were deployed for the third phase and it received 1,802 complaints.

More than 78.5 lakh voters were enlisted to exercise their franchise in the 31 Assembly seats in the third phase. A total of 205 candidates, including 13 women, are in the fray. Prominent among them were TMC MLAs Ashima Patra and Namita Saha, BJP leader Swapan Dasgupta and CPI(M) leader Kanti Ganguly. While TMC, BJP and Congress-Left alliance United Front have fielded 31 candidates each; 68 independents are also in the fray.

The Assembly elections in Bengal is being carried out in eight phases for 294 seats. With today’s voting, the fate of candidates in 91 of the 294 Assembly seats have already been decided.