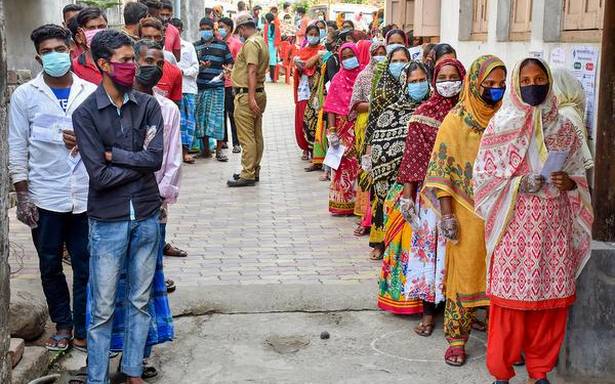 Here are the live updates of assembly elections counting results in the state of West Bengal.

West Bengal had elections in eight phases. The polling were held on March 27, April 1, April 6, April 10, April 17, April 22, April 26, and April 29. All India Trinamool Congress & allies, Sanjukta Morcha comprising Congress and the Left, Bharatiya Janata Party & allies and other parties were in fray.

While the Trinamool Congress is known for bringing celebrities into its fold, the BJP has followed suit, fielding television stars and other popular figures this time.

Will it cut ice or is it just another ploy by political parties that is bound to fall flat on its face?

As the BJP makes inroads into West Bengal, the incumbent Trinamool Congress government is pushing back, even as an experiment in Muslim politics is under way. Shiv Sahay Singh and Sudipta Datta report on the many strands of a polarised Bengal campaign.

84.63% of 73.80 lakh voters in 30 constituencies exercised their franchise during the first phase of polling on March 27.

30 seats went to polls in second phase of Bengal elections where turnout crossed 80%.

77.68% voter turnout was recorded in the third phase of the West Bengal assembly elections where more than 78.5 lakh voters exercised their franchise and decided the fate of 205 candidates.

Polling for 44 seats in the fourth phase of the West Bengal where over 1.15 crore voters exercised their franchise to decided the fate of 373 candidates recorded 76.16% turnout

Over one crore voters in West Bengal decided the political fate of 342 candidates, when 45 assembly constituencies went to polls in the fifth phase. It recorded 78.36% voter turnout.

In the sixth phase of polling in West Bengal for 43 Assembly seats across four districts, with about 79.09% voters exercising their franchise.

Over 86 lakh voters in West Bengal decided the political fate of 284 candidates, when 34 Assembly constituencies, including Chief Minister Mamata Banerjee’s home turf Bhabanipur, were polling in the seventh phase where around 75.06% voter turnout recorded.

Polling for 35 seats in the eighth phase of the assembly elections in West Bengal recorded 76.07% voter turnout.