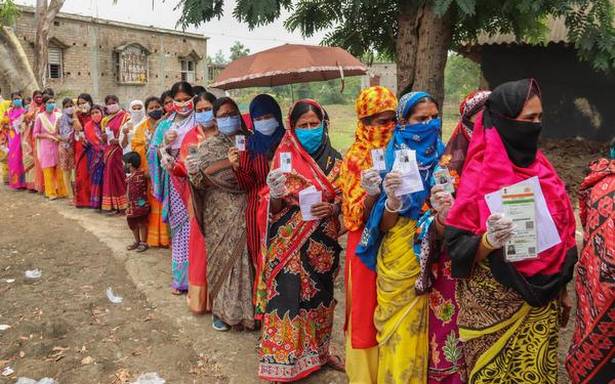 About 280 candidates are in the fray and the total number of polling booths is about 9,000

Elections to the seventh and penultimate phase in West Bengal will be held across 34 Assembly segments across four districts of the State including Kolkata on April 26 ( Monday). The Election Commission had scheduled polling on 36 seats but polling in two seats, Shamsherganj and Jangipur in Murshidabad district, has been postponed because of the deaths of Samyukt Morcha candidates in these seats.

Six constituencies each are going to polls in Dakshin Dinajpur and Malda districts, four in Kolkata and nine each in Paschim Bardhaman and Murshidabad districts. Of the 34 seats, four seats are reserved for Scheduled Caste candidates and two for Scheduled Tribe candidates. About 280 candidates are in the fray and the total number of polling booths is about 9,000.

The nine seats of Paschim Bardhaman are located across the Asansol-Durgapur industrial belt and some of the constituencies border Jharkhand. Among the candidates in this region are former Mayor of Asansol Municipal Corporation Jitendra Tewari, who is contesting from the Pandabeshwar Assembly seat. Mr. Tewari switched sides from the Trinamool Congress to the Bharatiya Janata Party at the eleventh hour.

Senior Trinamool Congress Minister Moloy Ghatak is contesting from Asansol Uttar and actor Sayoni Ghosh from Asansol Dakshin on the ticket of the State’s ruling party.

One of the youngest candidates in the elections is 26-year-old Aishe Ghosh, president of Jawaharlal Nehru University Student Union, contesting from the Jamuria Assembly seat. The voters of this region had supported the BJP in the 2019 Lok Sabha polls electing Babul Supriyo as the MP for the second time. The Trinamool has a strong organisational presence in the area and in certain pockets, Left parties have a strong presence because of the trade union movement.

The four seats going to polls in Kolkata — Kolkata Port, Bhawanipur, Rashbehari and Ballygunge — are Trinamool Congress bastions and party has fielded political veterans. Senior leader Subrata Mukherjee is contesting from Ballygunje, Sobhandeb Chattopadhyay, another Minister, is defending Bhawanipur, former Kolkata Mayor and Minister Firhad Hakim is contesting from Kolkata Port and Debasish Kumar from Rashbehari. The BJP has tried to bring in an element of surprise by fielding actor Rudraneel Ghosh from Bhawanipur and Lt. Gen. (retd.) Subrata Saha from Rashbehari.

Malda, Murshidabad and Dakshin Dinjapur districts are in for an interesting contest. Till the last Assembly polls, the region elected most of the Congress MLAs in the State. Despite extending its influence all across the State, the Trinamool Congress did not win many seats from the region. Things started changing after the Assembly election of 2016 when many legislators of the Left and Congress defected to the Trinamool Congress. The region, which has a significant minority population, where many Assembly seats share a border with Bangladesh has witnessed protests over the implementation of the Citizenship (Amendment) Act (CAA).

While the BJP has campaigned on the issue of ‘infiltration”, the Trinamool has sought voters on the promise that it will not allow any implementation of the CAA or the National Register of Citizens.