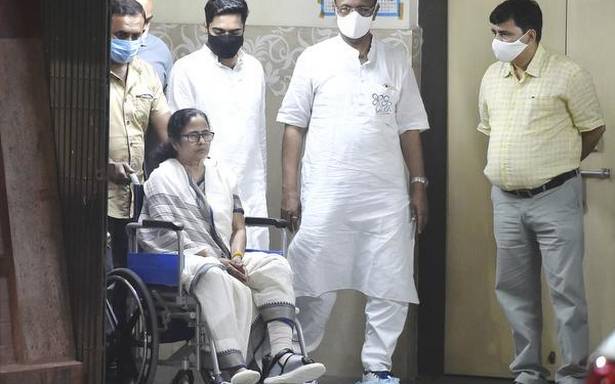 She can move with certain restrictions, say doctors.

West Bengal Chief Minister Mamata Banerjee was on Friday discharged from SSKM Hospital where she was admitted on Wednesday after suffering a leg injury in Nandigram. Ms. Banerjee came out of the Woodburn ward on a wheelchair and was taken to her Kalighat residence.

A six-member medical board that has been treating her said they had suggested that she should be under observation for the next 48 hours. “We discharged her because of her repeated requests…With certain restrictions, she will be able to move,” a member of the board told journalists.

“The medical board met today and examined her condition. She is responding well to the treatment and the improvement has been quite satisfactory. . The injury was examined, and the haematoma size has considerably diminished. The ankle injury also showed signs of improvement,” the doctor stated.

Doctors said new plaster slabs were put on her and members of the medical board had explained to her the precautions and restrictions. A number of visitors, including social activists Medha Patkar and Chief Justice of the Calcutta High Court T BN Radhakrishnan met the Chief Minister at the hospital.

On Thursday, Ms. Banerjee said “she will be back in her field in two to three days”.

The Trinamool Congress had to cancel the release of its manifesto on March 11 and reschedule it on March 14. The Chief Minister is likely to join the poll campaign from March 15. The first phase of polls is scheduled on March 27.

The Trinamool Congress on Friday observed a State-wide protest from 3 p.m. to 5 p.m. in protest against the alleged attack on Ms. Banerjee.