The ad is one more illustration of the way Maharashtra’s Shinde-Fadnavis government has been milking the Ganpati festival, with Chief Minister Eknath Shinde visiting Ganpati Mandals all day these last 10 days.
Jyoti Punwani reports.

In Mumbai, the Bharatiya Janata Party has placed an advertisement on the city’s public transport BEST buses which says: ‘Our government has come, the obstacles in the way of Hindu festivals have gone. Ganpati Bappa Morya.’ The advertisements in Marathi have BJP supremo and Prime Minister Narendra Damodardas Modi and Maharashtra BJP leader and Deputy Chief Minister Devendra Fadnavis’s photographs.

The Brihanmumbai Electric Supply and Transport (BEST) Undertaking runs buses throughout the city and extended suburbs, and also in Thane and Navi Mumbai, which are used by 2.9 million passengers every day.

By ‘obstacles’, the BJP refers to the restrictions put on Ganpati festival celebrations in the last two years due to the COVID-19 pandemic.

In 2020, the festival came up after the first lockdown had just eased up, and many Ganpati mandals, including the biggest ones, voluntarily decided to cancel celebrations, wary of the new virus. Despite this, there was a surge of infections after the festival.

Last year, the festival came just as the fearsome Delta wave had subsided, and doctors were advising caution to prevent a third wave. The government imposed restrictions on the number of people who could participate in bringing the idol home, immerse it, and also on visitors to pandals.

Offended by the BJP’s ads, some commuters have complained to the BEST, both in writing and orally. College lecturer Shyam Pakhare saw the ad on a bus near the CSMT station. “At first I thought the bus was a BJP vehicle. But it turned out to be an AC bus operating on a ring route from CSMT,” he said. “I was shocked. Passengers of all faiths use these buses. What will non-Hindus make of it? I felt I must complain.”

Pakhare sent off an e-mail to BEST GM Lokesh Chandra, wherein he described what he had seen: “a political advertisement of BJP with communal overtones.”

‘As a citizen of a secular country and regular traveller of BEST,’ said his complaint, ‘I found it very objectionable. It will lead to communal hatred in our society.’ The complaint ended with a request to remove the ad immediately and ensure that such ads are not displayed on BEST buses in future. 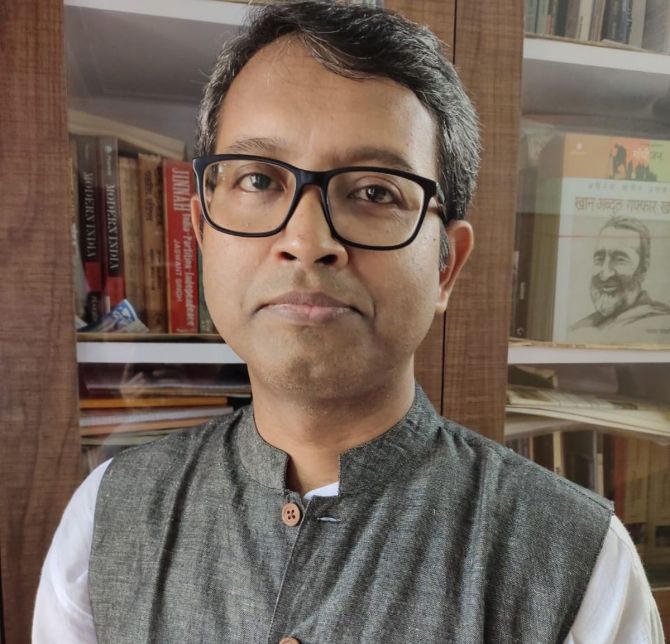 Pakhare’s complaint was followed by one from Jayant Dewan, trustee, Mumbai Sarvodaya Mandal. “What kind of advertising is this?” Jayant says angrily. “When were obstacles ever placed in the way of Hindu festivals? This is nothing but an attempt to polarise.”

In his complaint to BEST, Jayant, who was active in the Chhatra Yuva Sangharsh Vahini founded by Jayaprakash Narayan in the 1970s, described the ad as one that ‘spreads hatred. By implying that if the current government had not come, Hindus would have been in danger is a deliberate act of hatred. Putting such an ad on public transport is a misuse of our taxes.’

When contacted, BEST PRO Manoj Varade said that BEST had appointed an agency to deal with advertisements on buses. The only guidelines given to the agency were that ads must not promote harmful substances such as drugs, alcohol, cigarettes etc, and should not be obscene.

Asked whether an ad that caters to only the majority community was suitable for a public transport vehicle, Varade replied that “only the top management can take a decision on this.”

BEST GM Lokesh Chandra did not respond to messages.

Signpost India, the agency which handles BEST advertising, were equally uncommunicative. Promising to get back after consulting his seniors, their executive Jude neither got back nor did he respond to calls. Surprisingly, the BEST unions had little comment to make. Shashank Rao of the Municipal Mazdoor Union said he could not comment as he had not seen the ad. Ranjan Chaudhary, general secretary of the Shiv Sena Union, made a cryptic remark: “Those who are in power will do things their way.”

Pakhare received a mail that his complaint had been forwarded to the Wadala bus depot. “If the ad is not removed, I plan to take the issue further,” he said.

The ad is one more illustration of the way Maharashtra’s new Shinde-Fadnavis government has been milking the Ganpati festival, with Chief Minister Eknath Shinde visiting Ganpati Mandals all day these last 10 days. The government has also removed all restrictions on the height of the idol, which were imposed last year.