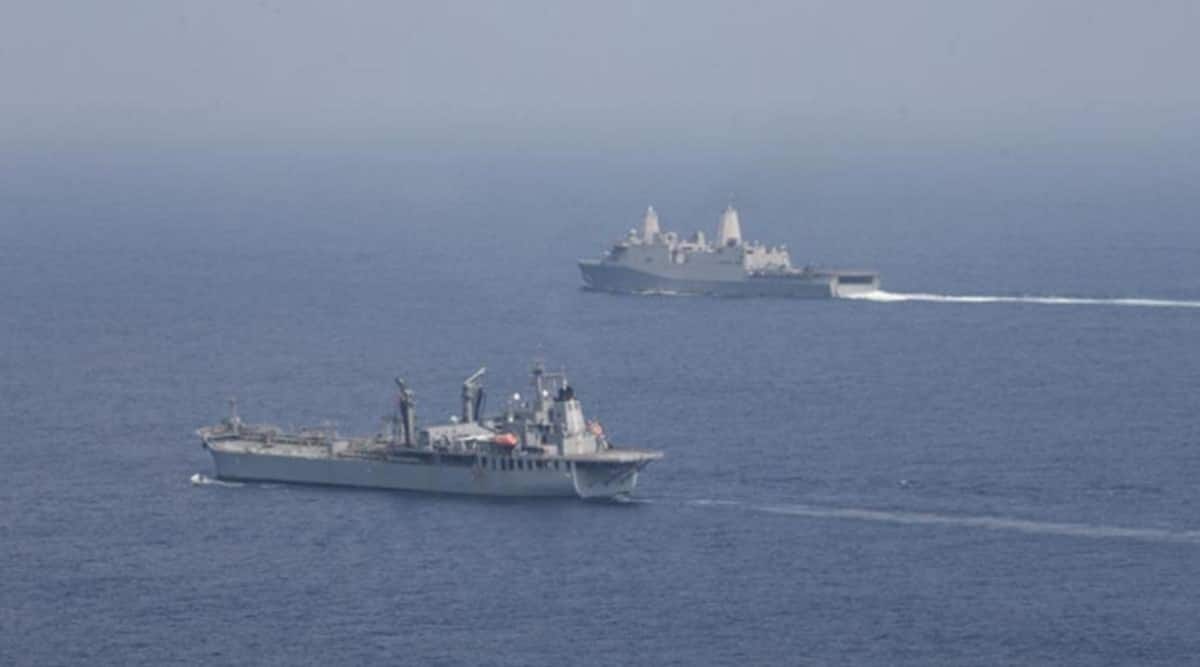 Ocean-based trade contributes to 95 per cent of India’s total trade in volume and 70 per cent in value. A recent freedom of navigation operation (FONOP) conducted by a US warship, the USS John Paul Jones, in India’s exclusive economic zone (EEZ) on April 7, 130 nautical miles west of the strategically important Lakshadweep Islands, has brought to sharp relief the limits on India’s sovereignty in the regulation of its EEZ and its relationship with customary international law and the United Nations Convention on the Law of the Sea (UNCLOS). The incident is a reminder that India needs to have efficient regulation of the EEZ despite inherent limitations presented by CIL and UNCLOS.

The UNCLOS prescribes the EEZ as an area of the sea in which a sovereign state has special sovereign rights regarding the exploration and use of marine resources, including energy production from water and wind. It stretches from the baseline out to 200 nautical miles (370 kilometres) from the coast of the sovereign state. Similarly, the territorial sea (TS) as per UNCLOS, is an area extending up to 12 nautical miles from the base of a country’s coastline. The difference between EEZ and TS is that a state has full sovereignty over the waters encompassed within the TS, whereas with regard to the EEZ, the state merely has exclusive sovereign economic rights to substances lying below the surface of the sea.

The Ministry of External Affairs objected to the FONOP, classifying it as a violation of Indian law, which required the US to provide prior notice before entering the Indian EEZ. Interestingly, the law referred to by the MEA — The Territorial Waters, Continental Shelf, Exclusive Economic Zones and Maritime Zones Act, 1976 (Indian Act), in particular Section 7, which concerns the EEZ — nowhere makes a whiff of a reference to any prior notice. The obligation for prior notice to be given by a foreign military vessel (FMV) to the MEA, as per Section 4, Indian Act, arises only when the FMV desires to enter the Indian TS, which in any case is sovereign Indian territory. Furthermore, Article 58 of the UNCLOS encapsulates the principle of freedom of navigation and innocent passage in the EEZ for all vessels, including a FMV, regardless of consent from the coastal state. Thus, there is no iota of doubt that the US committed no illegality by entering the Indian EEZ without prior notice since as per CIL, freedom of navigation in international waters and in the EEZ is an inalienable right.

What would be the ramifications if Section 7 of the Indian Act hypothetically imposed the requirement of prior notice on a FMV before entering the Indian EEZ (not sovereign Indian territory)? And would this be compliant with international law and UNCLOS?

The US is not one of the 168 parties to the UNCLOS, yet the Reagan administration on March 10, 1983, by way of an executive decision on ocean policy firmly entrenched and considered itself bound by the principles of UNCLOS, particularly with regard to the limits of the EEZ being 200 nautical miles, the exclusive sovereign economic rights of coastal states in the EEZ, and freedom of navigation, etc.

The International Court of Justice (ICJ), by way of its decision in Concerning Delimitation of the Maritime Boundary in the Gulf of Maine Area (Canada/United States) [1984], para. 94 and in Libya v Malta [1985], para. 34, ascribed the principles of EEZ under Article 57 & 58, UNCLOS as CIL. Interestingly, the US also ascribes the status of CIL to UNCLOS at large. It is a well-established principle of international law that CIL is modified by way of the principle of state practice, which was established by the ICJ in the North Sea Continental Shelf case [1969].

In a nutshell, state practice is when a number of states act uniformly and consistently over a period of time in a manner induced by a belief that acting in that particular manner is obligatory. To determine whether a principle has gained the status of state practice, it is necessary to closely evaluate the evidence as reflected by the particular actions of sovereign states. Once a specific action attains the status of state practice, it is ipso facto recognised as CIL. Any violation of the CIL is prohibited by international law, the violation of which is determined by the ICJ. Eighteen UNCLOS states have imposed some or other forms of restrictions/regulations on FMVs intended to enter their EEZ. Interestingly, of them, India, China, Bangladesh, Brazil, Pakistan and Indonesia, all are in the category of top 10 largest navies of the world, indicating a clear and persistent state practice amongst countries having big navies and long coasts of regulated access of FMV in their EEZ. Undoubtedly, the United States is also in the aforesaid ensemble list of top 10 navies.

A good case can be made against the US being bound by regulations of coastal states regarding access of FMV in the EEZ. Moreover, imposing a prior notice before access to the EEZ requirement is in no manner violative of the freedom of navigation principles enshrined under CIL since this in no way restricts the right of a FMV to access the EEZ. It merely mandates them to inform in advance prior to their arrival. Since states have sovereign economic rights over the EEZ, they could be indulging in economic exploration activities in a particular section of the EEZ, which could very well be disturbed by an incoming large FMV, thus intruding into their sovereign economic rights. A FMV informing about its arrival in advance could help the state plan its economic exploration in advance, thus achieving a fine balance between sovereign economic rights of states and CIL rights of the FMV.

India needs to amend the Indian Act to require FMVs to provide prior notice before entering its EEZ. In doing so, India would be well within her rights emanating under UNCLOS, and state practice under CIL, while in no way violating the freedom of navigation principles expounded by the ICJ in the Nicaragua case. India would have a good arguable case against non-UNCLOS parties like USA by virtue of this amendment in view of the CIL status ascribed to UNCLOS duly tempered by the principle of state practice.

Manubarwala, advocate at the Supreme Court of India, formerly served as Special Advisor on International Law to the Office of the President of Afghanistan; Kapoor is an advocate at the Punjab and Haryana High Court