Wang Yang and Xi Jinping’s visits signal the beginning of a major Chinese push to bring about a transformation of Tibet, observes Jayadeva Ranade, the distinguished China expert and retired RA&W officer.

The 3-day (August 18-20, 2021) visit to Lhasa by Wang Yang, member of the Chinese Communist party’s Politburo Standing Committee and chairman of the Chinese People’s Political Consultative Conference, at the head of a 22-member delegation is important.

The Chinese People’s Political Consultative Conference is responsible for policies and interactions with all non-CCP entities, China’s ethnic minorities and religion with the Communist party central committee’s United Front Work Department reporting directly to it.

Wang Yang’s visit was followed by Chinese President Xi Jinping’s visit in late July and, together, they signal the beginning of a major push to bring about a cultural and socio-economic transformation of Tibet.

The ’14th Five Year Plan and Long Range Plan-2030′ approved by the National People’s Congress in March 2021 gave some indication of these changes.

Wang Yang arrived in Lhasa on August 18, 2021, to take part in the 70th anniversary celebrations of the so-called ‘peaceful liberation of Tibet’ the following day.

The People’s Daily newspaper marked the celebrations with a special 20-page pull-out.

Wang Yang’s delegation included persons with a wealth of knowledge of Tibet and Tibetans.

In it were: You Quan, politburo member and head of the United Front Work Department; Pema Trinley, presently vice chairman of the NPC standing committee and former Chairman of the TAR people’s government; Zhang Qingli, vice chairman of the CPPCC standing committee and former hard-line TAR party secretary from 2006-2011; Sithar, former executive deputy minister and Head of the UFWD seventh bureau who played a key role during the 2002-2010 talks with the Dalai Lama’s envoys; Admiral Miao Hua, political commissar of the Central Military Commission.

More than 20,000 party cadres and the ‘masses’ attended the official celebrations at the Potala Palace Square.

They included 24 officers of the People’s Liberation Army including 7 lady officers and 10 representatives from the People’s Armed Police Force. 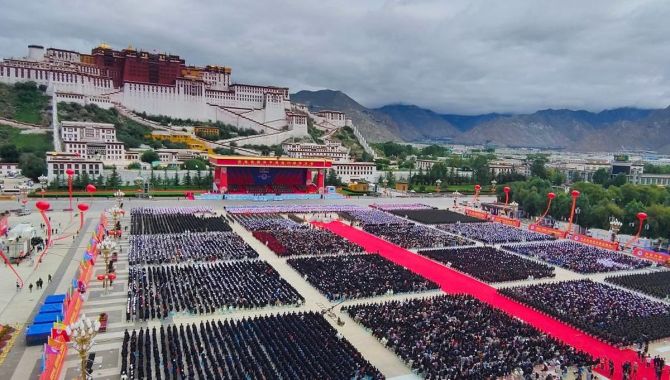 Wang Yang addressed the gathering and You Quan, head of the UFWD, read the congratulatory messages from the CCP central committee, national people’s congress, state council, CPPCC and the central military commission.

Chairman of the TAR people’s government Che Dalha presided over by the celebrations.

Wang Yang presented commemorative plaques to select persons and representatives of the TAR, the Tibet military region, headquarters of the People’s Armed Police Force, the TAR political and legal affairs commission and the Tibet Branch of the Buddhist Association of China.

As he was neither photographed nor mentioned among the delegates from Beijing, it appears he arrived in Lhasa separately.

In his speech, Wang Yang asserted that ‘The peaceful liberation of Tibet in 1951 was a major victory in the cause of liberation of the Chinese people and China’s reunification’ and ‘marked a historic transition with epoch-making significance for Tibet’.

Implying that the Communist party has acceptability in Tibet, Wang highlighted that Tibet presently has over 35,000 deputies of people’s congresses and 8,000 CPPCC members at various levels, 90 percent of whom are ethnic minorities.

More than 1,700 temples in Tibet have full access to water, electricity, the Internet, fire-fighting and other facilities, he said and added that all the 46,000 monks and nuns in TAR are covered by the government’s social security scheme.

Notwithstanding Wang Yang’s declaration that ‘separatist and sabotage activities’ committed by ‘the Dalai group and hostile external forces have been crushed’, he urged officials and the general public of all ethnic groups to mobilise to forge an ‘ironclad defence’ against separatist activities!

Describing Tibet’s development over the past seven decades as a blessing, he warned that ‘separatist activities and chaos can only lead to disaster’. Wang Yang stressed that Any attempt or maneuver designed to separate Tibet from China is doomed to fail’. 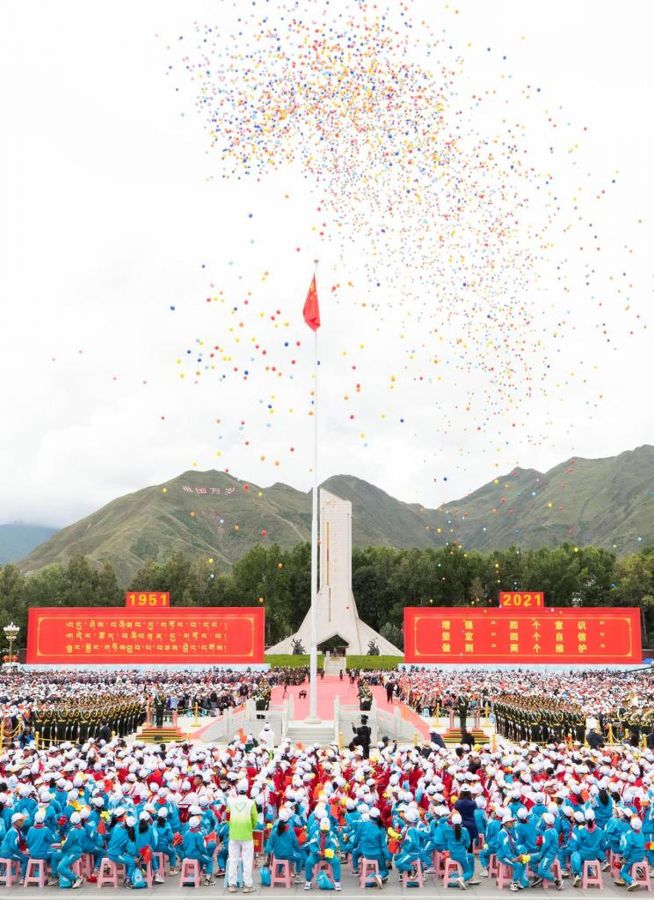 Wang Yang reiterated that ‘religions in China are Chinese in orientation’ and cadres must guide ‘Tibetan Buddhism in adapting itself to socialist society’ to safeguard national security and social harmony.

His call to rally religious figures and believers to jointly ‘safeguard national security and social harmony’ reveals that monks, nuns and Tibetans continue to resist the Communist party’s efforts.

Wang emphasised the need to assimilate Tibetan culture with that of the Han, since ‘solidifying the cultural foundation for ethnic unity’ and ‘a shared cultural identity underpins ethnic unity’.

He asserted that efforts be made to ‘teach standard spoken and written Chinese language’ and that shared ‘Chinese cultural symbols and images of the Chinese nation among all ethnic groups’ are a ‘source of inspiration for the entire Chinese nation’.

The following day the delegation split into two groups.

You Quan, Pema Trinlay and some of the other delegates from Beijing visited Lhoka (Chinese: Shannan) and Shigatse (Chinese: Xigaze). Lobsang Gyaltsen, chairman of the TAR People’s Congress, accompanied this group. 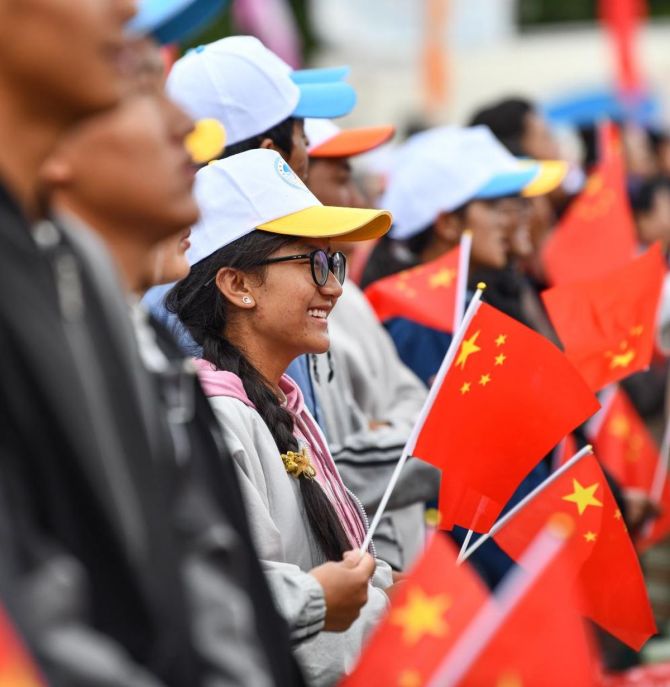 Interestingly, when the delegation ‘inspected’ the Tashi Lhunpo monastery in Shigatse, there was no mention of Gyaltsen Norbu, the Chinese-appointed 11th Panchen Lama, being present at the monastery, which is his traditional religious seat.

Wang Yang’s speech outlined the CCP’s policy for Tibet in the coming years.

The focus was on unity and oneness of culture among Han and Tibetan ethnic groups and the defence and security of the borders.

His speech also revealed that the Communist party continues to face resistance.