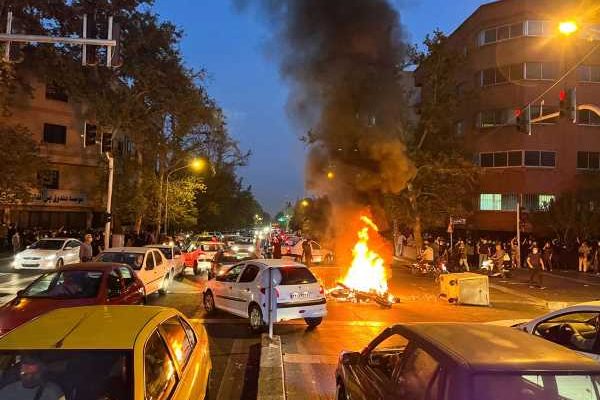 Mahsa Amini’s tragic custodial death in Tehran has triggered protests across Iran.
Defiant, jean clad women minus their tunics and hijabs are marching in unison and shouting ‘Down with the dictator’.
Women in Iran have been pushed to the wall and are no longer willing to abide by the restrictions placed on them, explains Rashme Sehgal.

We were a group of Indian women journalists who had the opportunity to visit Iran in October 2019 traveling across several cities including Tehran, Shiraz and Isfahan, a major city in the Greater Isfahan region.

We had one middle-aged woman minder/guide, obviously a government appointee along with two translators, one male and one female who accompanied us throughout our stay.

The job of the guide was primarily to ensure that the sixteen of us were always properly clad in public, hair covered under scarves or dupattas, legs and arms fully covered with appropriate clothing.

Those of us who wore jeans had to wear kurtas that came down to their knees.

If she saw any of us with a scarf that did not cover our entire head, she would rebuke us as would our woman translator.

Both these women at all times wore long black tunics that came down to their feet and black hijabs that covered their heads.

Thankfully, unlike the dress code now imposed by the Taliban on the women folk of Afghanistan, Iranian women were not expected to cover their faces while in public. 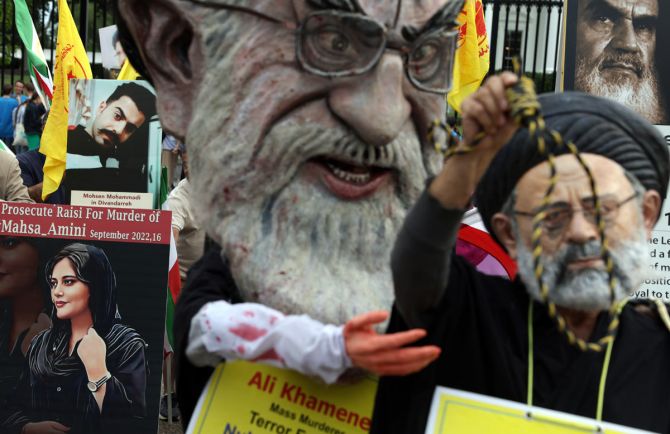 As the ice broke between us and our young woman translator, she confided to us that she was engaged to be married to an Iranian businessman settled in Canada and it was obvious she wanted to leave the country at the earliest opportunity.

Soon she was showing us selfies she had exchanged with her fiance where she was dressed in a black strapless gown and mini skirts, her shoulder length hair cut in a stylish, frizzy fashion.

She was speaking for many young women chaffing under the weight of wearing long tunics and hijabs in public unable to enjoying the freedom to dress as they pleased once they stepped outside the precincts of their homes.

In the wash room, even our guide when she took off her black tunic was found to be wearing pants, a short blouse and had short bobbed hair.

Her public persona was so different because she spent her time ensuring our hair did not show under our scarves and that we were appropriately dressed.

In an interaction with the Iranian minister of women and family affairs, Masoumeh Ebtekar (she resigned in 2021) she had pointed out how she had been active in protests against the Shah Reza Pahlavi regime and had also been jailed on several occasions.

Ebtekar was appointed the first woman vice president in Iran and also served as minister of environment for many years before being given the women and family affairs ministry.

“I was happy to help usher in the Islamic revolution in 1979 and today we have 50 per cent women students studying in our universities and 25 per cent of the professors in our colleges are women,” she had informed us.

When asked why foreign women tourists such as us were forced to wear a hijab and if their government had any plan to remove this practice, Ebtekar replied that so far they had received no such demand but if they did, the government could well consider changing the law in the future. Well, the time for change seems to have arrived.

The tragic custodial death of 22-year-old Mahsa Amini in Tehran last week has triggered a wave of protests across Iran.

These protests have spread across several cities where defiant, jean clad women minus their tunics and hijabs are marching in unison and shouting ‘Down with the dictator’.

The dictator they were referring to was their President Ebrahim Raisi who had given an order on July 5 for a stricter enforcement of the hijab law.

The morality police have warned at greater state surveillance against women who are dressed in ‘unsuitable’ attire.

Those who go against the law faced heavy fines, arrest and even death.

Clashes broke out in Amini’s home town of Saghez in Kurdistan at the time of her burial last Saturday.

These protests have picked up momentum and have spread to 80 cities with university students playing a prominent role in these demonstrations.

Reports indicate that over forty people have died, many of them belonging to Kurdistan where security forces have come down heavily on the protesters using tear gas and pellets.

While Raisi is blaming conspirators for inciting unrest, the protestors have been increasingly taking the fight to security forces, in scenes that have not been witnessed earlier in Iran. 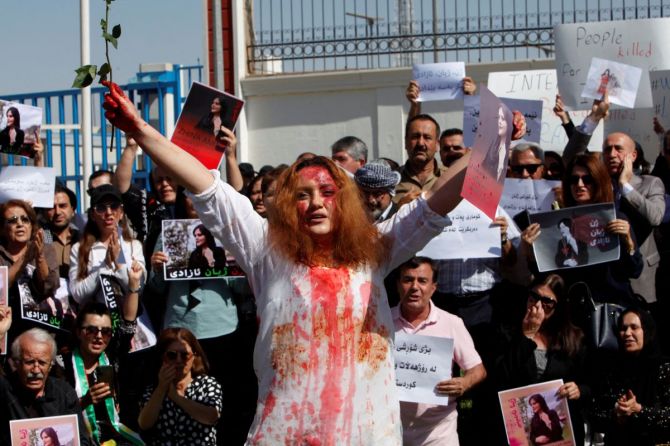 A stricter enactment of this law may have triggered these protests but in essence, a majority of Iranian women have strongly opposed the practice of hijab.

During the time of our visit, President Hassan Rouhani was heading the government and though he was no bleeding liberal, the morality police did not go to the lengths to which they are willing to go in these past three months where facial recognition technology is being reportedly used against women who break the law.

When we visited the beautiful Shah mosque located in the Naghsh-Jahan Square in Isfahan, many young jean clad women were sitting outside their shops, brushes in hand, painting designs on blue pottery bowls for which this town is famous.

Some of these women, I noticed, were wearing head scarves that left most of their hair uncovered. 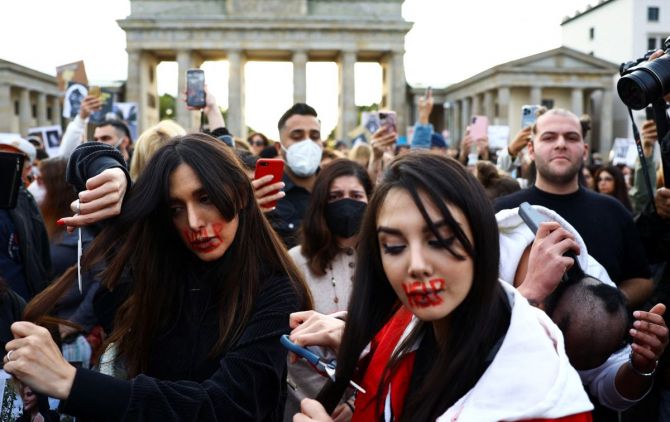 Another surprise was when we went past a restaurant in Isfahan, our group heard loud music and singing accompanied by clapping and loud taxi whistling.

Some of us stepped inside and saw the restaurant full of young women college students being entertained by two male musicians who were singing and playing the tambourine.

One of the women journalists in our group wanted to get up and dance, but were stopped by the restaurant owner who told her that dancing in public was forbidden in the Islamic Republic.

The fact that the demonstrations have spread so rapidly shows that women no longer want to abide by this dress code.

Some of these women have been shown in the media defiantly chopping their hair and burning their hijabs, a strong rebuke to the iron arm tactics being employed by their morality police.

This hijab compliance must been seen as part of a wider clamp down because Iran has been brimming over with protests during the last few years.

Much of these are triggered by the strong resentment over economic hardship and mismanagement by the Iranian government. 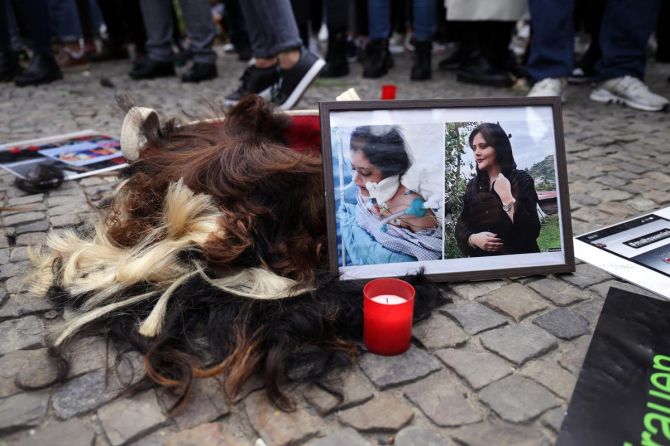 The women in neighbouring Afghanistan must be watching these protests closely.

The arrival of the Taliban regime has forced Afghani women to retreat into their homes with practically no access to jobs and education.

The progress they had made against all odds in the last 20 years literally disappeared overnight.

Women in India and especially Muslim women are also watching the developments in Iran with a great deal of concern.

The question of hijab has been dominating the Indian mind space especially now that the hearings of whether girl students in Karnataka can attend school wearing a hijab are presently being heard in the Supreme Court.

This is a difficult situation that needs early resolution given that all governmental policies today are framed under the lens of a Hindu majoritarian government determined to place its authoritarian stamp on minorities.

Whereas some right wing politicians believe the hijab crisis has been triggered by radical elements, there is no doubt that the government should by now have found a via medium by which the girl students could have continued their education. The world is keenly watching how long Iranian women will be able to sustain these demonstrations.

The Islamic police responsible for ensuring the implementation of a strict dress code have been resorting to a heavy use of force.

The women who have gone public in cutting their hair and burning their hijabs face a death sentence under Islamic law.

Whatever the outcome, there is little doubt women in Iran have been pushed to the wall and are no longer willing to abide by the restrictions placed on them.