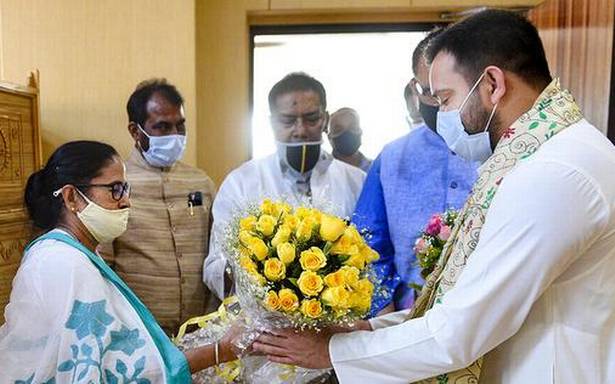 Mr. Yadav said the first priority should be to stop “communal forces” and appealed to his supporters to put their “full force behind Mamataji to ensure that the BJP is defeated”.

Asked whether the RJD will contest in Bengal, he said, “If Mamataji is contesting it means we are contesting. The BJP is spreading lies, confusion and hate. They have done nothing for Bihar. They had promised jobs to 20 lakh but have not been able to upgrade the Patna university to central university.”

On the Left parties and the Congress being part of the alliance with the RJD in Bihar, Mr. Yadav said the fight in Bengal is far greater than any alliance. “Our alliance [with the two parties] is for Bihar. Even in Kerala we have LDF and UDF,” he said referring to the two parties competing with each other in Kerala. While the RJD was not part of the Left Front in Bengal, the Left parties had supported RJD MLA Mohammad Sohrab in 2006, who joined the Trinamool Congress in 2013.

The RJD leader heaped praises on Ms. Banerjee and said the manner in which she led the fight against COVID-19 from the front is exemplary. Mr .Yadav was among the leaders who supported Ms. Banerjee when she sat on dharna here in February 2019, protesting against CBI action on IPS officer Rajeev Kumar.Ms. Banerjee said the people of Bihar gave the mandate to Mr. Yadav but the BJP formed the government. She said her blessings were with Mr. Yadav and said the Nitish Kumar-led government will not complete its term. She also said the manner a veteran politician like “Lalu Prasad Yadav is out behind bars and tortured is most unfortunate”.

“I told Tejashwi that they have divided the districts for polling and elections in one district are being held on three dates. I want the Election Commission to work impartially and not as per the instructions of the BJP.” Samajwadi Party leader Akhilesh Yadav has also expressed support to Ms. Banerjee.

BJP leader Suvendu Adhikari asked how the Chief Minister held a political meeting with the leader of another party at the State Secretariat when the model code is in force.