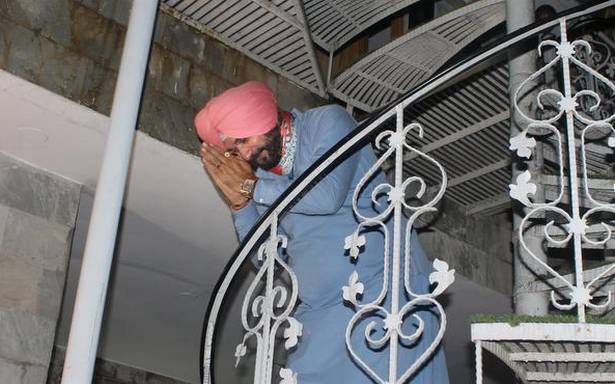 Punjab Congress president Navjot Singh Sidhu on Monday said he would be working towards giving power of people back to them through the party’s 18-point agenda while senior leader Sukhpal Khaira hoped that the new president “will break the ice with Chief Minister Amarinder Singh in an honourable manner”.

Mr. Sidhu, a detractor of Captain (retd.) Amarinder Singh, was appointed as party chief on Sunday. However, both the leaders have not met so far, even as the former has been meeting leaders, MLAs and Ministers across the State. Capt. Singh has not yet publicly congratulated Mr. Sidhu nor has Mr. Sidhu uttered any word on meeting him, a clear indication that all is not well within the party.

“Will work along every member of Congress family in Punjab to fulfil the mission of #JittegaPunjab as a humble Congress worker to give power of the people back to the people through the #PunjabModel & High Command’s 18-point agenda … My Journey has just begun !!,” said Mr. Sidhu in a tweet.

Sharing his father’s picture with Jawaharlal Nehru, he said: “To share prosperity, privilege & freedom not just among a few but among all, my father a Congress worker left a royal household & joined freedom struggle, was sentenced to death for his patriotic work, reprieved by king’s amnesty, became DCC president, MLA, MLC & Advocate General.

“Today, to work further for the same dream & strengthen the invincible fort of @INCIndia, Punjab. I am grateful to hon’ble Congress president Sonia Gandhiji, Shri @RahulGandhiji & Smt @priyankagandhiji for bestowing their faith in me & giving me this pivotal responsibility.”

The 18-point programme was suggested by the three-member AICC panel that had been set up to resolve the power tussle between Mr. Sidhu and Capt. Amarinder. The AICC panel comprised Leader of the Opposition in the Rajya Sabha Mallikarjun Kharge, general secretary (Punjab) Harish Rawat and J.P. Aggarwal. The programme included issues like action in the 2015 sacrilege cases, drug menace, liquor, transport and mining mafia, besides working a way out on power purchase agreements with private companies among others.

In his tweet, Mr. Khaira said, “I welcome the appointment of @sherryontopp as PPC chief. I’m sure he’ll break the ice with @capt_amarinder in an honourable manner and work towards forming a Cong. govt. again to resolve burning issues like sacrilege & Behbal besides ameliorating the lot of the poor.”