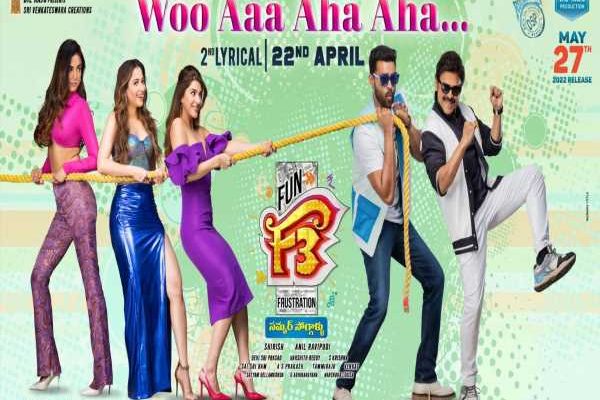 The comedy caper F3  which has Venkatesh Daggubati and Varun Tej  in the lead role, is one of the much hyped movie of Tollywood. With two popular actors in the lead roles, the film has got the hype going for it. The  team has started the promotional activities and   now they have deiced to release the lyrical video of second single Woo Aaa Aha Aha from F3 on 22nd April. The makers confirmed the same by releasing a new poster on official Twitter handle. Coming on the poster, it features a rope pulling game between the male and female leads of the movie. Mehreen Pirzada and Tamannah Bhatia are playing the female leads.

The makers have already released the first single Lab Dab Lab Dab Dabboo in the month of February. The song was crooned  by Ram Miriyala and it was all about the greatness of the  money. Ram Miriyala’s vocals make this song effective.

Directed by Anil Ravipudi, the film also has Sunil and  Sonal Chauhan playing the female leads. F3 has  the music by sensational music director Devi Sri Prasad. The comedy drama is produced by Shirish and  presented by Dil Raju. Sai Sri Ram is handling the cinematography and AS Prakash as the art director whereas Tammiraju is the editor.