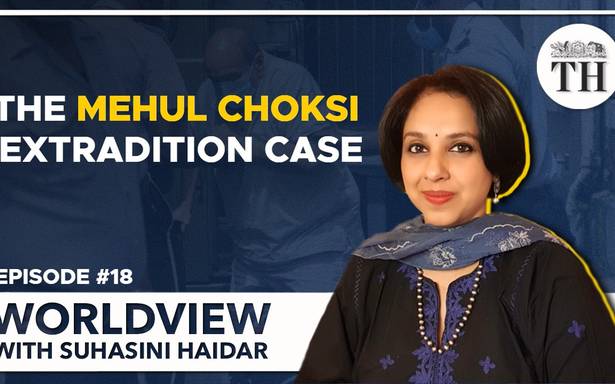 In this episode of Worldview, our Diplomatic Affairs Editor Suhasini Haidar takes a look at the Mehul Choksi mystery and the role of Indian diplomacy in tracking fugitives abroad, and bringing them back to face trial in India.

The case of Mehul Choksi, the diamond merchant who escaped an investigation into the 13,500 Rs crore PNB loan fraud scam by taking citizenship of the Caribbean islands of Antigua and Barbuda, is at the centre of attention given events of the past month.

After going missing for a few days at the end of May from Antigua, Choksi appeared in Dominica, was taken into custody by police for illegal entry, and has been held there since.

He also showed bruises he sustained during what he says was an abduction by two “Indians” along with a woman who fraudulently befriended him. Those charges are now being investigated in Antigua.

In fact, although the government has not admitted it, it is believed that an 8-member team of India diplomats, consular and investigation officials landed in Dominica at the start of the hearing on board an Qatar Airways executive jet, to deliver documents to the court, and perhaps to take Choksi home, but as the case dragged on, the team returned to Delhi empty handed.

2. Why hasn’t the Antiguan government expedited his extradition, given good ties with India, and an extradition arrangement between the two governments, signed only in 2018?

3. Who is behind the mysterious transfer of Choksi from Antigua to Dominica?

– Did Choksi, as the Antigua government claimed, go of his own will, either for a pleasure trip or to escape extradition from Antigua?

– Or Was he abducted, as Choksi claims, and if so by whom, and were Indian agents or mercenaries attempting to bundle him out of there and bring him to India to stand trial?

Whichever the plan was, it seems to have been unsuccessful for now.

4. Finally, what is the truth of Choksi’s citizenship and residency? According to the Indian citizenship act…He lost his Indian citizenship the moment he acquired the Antiguan passport in 2017. Antigua’s courts are hearing their government’s petition to cancel his citizenship. Meanwhile Dominica passed orders prohibiting his entry, just a day before he appeared there. Does this in effect, make Choksi a stateless citizen?

Now it is not often that the MEA has to deal with these kind of mysteries and whodunnits, and officials actually predict that the process, which has dragged on since 2018, when the Interpol Red Corner Notice was first issued, could take time. Remember that despite

Favourable orders in two other cases, that of Choksi’s nephew Nirav Modi, and fugitive businessman Vijay Mallya, the procedure in the United Kingdom has meant that neither have returned months after the UK courts and government ordered their extradition.

How does this work?

India actually has extradition treaties with 50 countries, and arrangements with another 11.

However, the cumbersome process means, that even after a fugitive is identified abroad, and an extradition request is made, there are many challenges to the process, especially if these are financial cases, not criminal ones:

– Between 2002-2018, about 60-70 fugitives have been extradited to India, of which about a third have come back since 2014, the MEA has said in parliament. But more than 300 such extradition requests are pending despite red corner notices, as each one takes time, effort and a lot of money spent by the government to pursue them

– Even as old extradition requests are pursued, more fugitives are fleeing: According to the MEA 53 new economic offenders fled the country between 2016 and 2019 https://www.mea.gov.in/rajya-sabha.htm?dtl/31492/question+no659+extradition+of+indians+involved+in+financial+irregularities

– When it comes to financial irregularities in particular, the paperwork is the first challenge: between 2016 and 2019 the Directorate of Enforcement says Red Corner Notices (RCN) have been issued against 25 persons, extradition requests have been issued for 14 persons, action under Fugitive Economic Offenders Act have been initiated against 7 persons and 3 persons accused under PMLA have been brought back to India. https://www.mea.gov.in/rajya-sabha.htm?dtl/31492/QUESTION_NO659_EXTRADITION_OF_INDIANS_INVOLVED_IN_FINANCIAL_IRREGULARITIES

– In most jurisdictions, the red corner notice will only ensure the fugitive can be held or barred from travelling, but the case has to be fought out in courts, with reams of documents, translations, and officials having to be flown back and forth.

– Many countries will not extradite a fugitive if he or she faces a death penalty in India, which they see as a human rights violation, some will not extradite a third country’s national as it may complicate bilateral ties, others won’t extradite their own nationals in order to protect them, as India found with 26/11 planner David Coleman Headley, who is held in the United States

– Some of the famous extradition cases that have been pursued successfully are those of Abu Salem, wanted for the Mumbai who was sent back along with his partner and film star Monica Bedi from Portugal, underworld don Chota Rajan from Indonesia, ULFA Assam terror group chief Anup Chetia from Bangladesh, and most recently, British businessman wanted in a helicopter corruption case Christian Michel, who was extradited from UAE. (Latest list, upto 2016 http://mea.gov.in/Images/attach/lu2797_Annexure_B.pdf )

Extradition is only one of five ways a State like India can pursue with a fugitive:

1. Deportation or Expulsion- convince the host country to send the fugitive back themselves as a sovereign decision, this has been done in some famous terror cases from UAE, Saudi Arabia, Bangladesh and Nepal

2. Surrender- convince the fugitive to return of their own volition by offering leniency or even threats

3. Abduction- this is done stealthily, and often with the tacit complicity of the host government, so as not to threaten their territorial sovereignty. While such cases are many, they are for obvious reasons, not publicised, as they are illegal in international law. Israel’s Mossad agency had a special unit for Nazi hunters who brought some like Eichmann back to stand trial.

4. Killing- these are even less publicised, but the famous was the US hunt for Osama Bin Laden, wanted for the September 11 attacks

The outcome of Choksi’s case is still awaited- will Dominica deport him? If so, to Antigua, India, or even allow him to go elsewhere? The MEA says it will pursue all fugitives no matter where they are, but as the past show, this is much much easier said than done.

2. Escaped: True Stories of Indian fugitives in London by Danish and Ruhi Khan

3. Manhunt by Peter Bergen on the hunt for Bin Laden

5. Spies against Armageddon on Israel’s secret wars against fugitives