A native of Uttar Pradesh’s Shahjahanpur, Kumar was preparing for a 25-hour bus ride to his hometown with his family of 10 in fear of a lockdown. 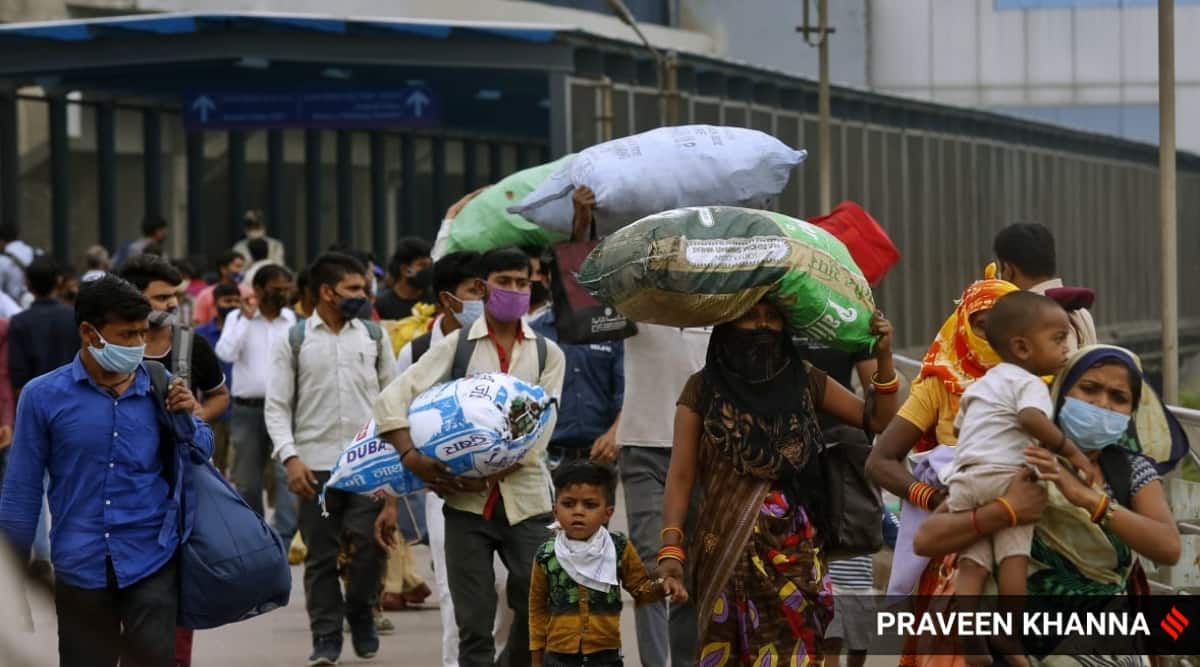 AROUND ONE month ago, Anuj Kumar, a brick kiln worker in Gujarat’s Sathara, heard from a local NGO worker that the government had started a new scheme – One Nation, One Ration Card (ONORC).

“The purvata mamlatdar [provisions official] asked me to link my Aadhaar, which I did. Still, nothing came of it. Yeh sab kehne ki baat hai (They just say such things). Us poor, we never get anything,” he said.

A native of Uttar Pradesh’s Shahjahanpur, Kumar was preparing for a 25-hour bus ride to his hometown with his family of 10 in fear of a lockdown.

In Rajasthan’s Bhilwara, a brick kiln trade union wrote to the district logistics officer on March 9, stating that 20,000 migrant workers in about 200 factories were unable to receive rations under the ONORC, despite a month passing since the state government’s announcement that the scheme had been implemented.

Premchand, a worker from Chitrakoot in Uttar Pradesh who had tried to avail the scheme, said he was told that the scheme hadn’t started yet, even after he linked the card to his Aadhaar. “For us, it would make it much easier to receive the ration wherever we are,” he said.

Several researchers have found that post-Covid, migration is now increasingly without families. Several field workers say the scheme provides little help on the ground, with single, male migrants preferring that their families back home avail the ration every month.

In the backdrop of last year’s migrant crisis, the government held high their efforts to expand the ‘One Nation, One Ration Card’ scheme, enabling migrant workers to receive their entitled food grains from any fair price shop in the nation using their Aadhaar card.

In his June 2020 address, Prime Minister Narendra Modi said, “The biggest benefit of the One Nation One Ration Card scheme will be to those poor workers who leave their villages and migrate elsewhere for livelihood.”

With local lockdowns gradually increasing and with cities witnessing another migrant exodus, interviews with researchers, field workers, and the migrant workers they work with show the logistical hurdles still facing the programme a year after its initial implementation.

Transactions of the scheme, although growing, remain low. In total, only a little over 50,000 transactions have been made across state borders, of which almost 90 per cent has been in the past year, according to the Integrated Management of Public Distribution System portal.

The scheme began picking pace in July 2020, when it was enabled in 20 states and UTs. April saw over 11,000 transactions – double the number in March – with Maharashtra, Gujarat, Andhra Pradesh, and Haryana seeing the bulk of transactions.

“The programme needs more coordination. We haven’t worked it out, but it should be possible to fix. It needs to be fully operationalised, which hasn’t happened yet,” said Amitabh Kundu, a prominent labour economist who has led several migration-related government committees, including an ongoing migrant survey by the Labour Ministry.

“The scheme is just not working,” said Arvind Ghritlahre, a block leader for Jan Sahas in Pachri, Chhattisgarh. “We did a survey of migrants from Mahasamund to Ranchi. Several have tried multiple times but they have been told that it doesn’t work.”

According to K R Shyam Sundar, a professor of Human Resource Development at Xavier School of Management, Jamshedpur, ONORC is still a “mirage”. “It will take a considerable amount of time to convert into reality,” he said.

When asked about issues with the scheme, a spokesperson for the Ministry of Consumer Affairs, Food & Public Distribution provided numbers for intra- and inter-state transactions to state that “ONORC is being implemented with great vigour across the country”.

“Moving population has been availing the benefits of the same in huge number,” the spokesperson said. “As the awareness about it gradually settles in the population of different demographics, its success will deepen further … It’s an incremental process. You cannot judge the face of the building by looking at the structure which is in works.”