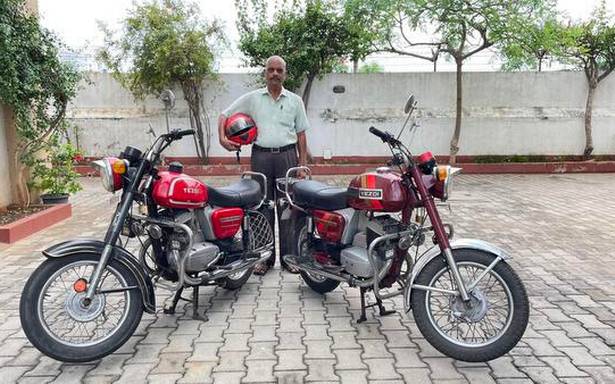 The pandemic closing the doors to the great outdoors, Roaring Riders, a 250-member Jawa and Yezdi owners club from Chennai fuelled up heavily on nostalgia for the 2021 edition of International Jawa Day (observed annually on the second Sunday of July).

Among those who enabled the time travel through online engagement last Sunday is 63-year-old PV Murali Mohan, who shared his experience of “riding two horses” sans the conflict implied by the phrase.

The two horses are from the same stables — a 1983 Yezdi Roadking and a 1986 Yezdi Classic (Deluxe), owned by Murali Mohan for 10 and 15 years respectively.

Before he pressed these two machines into his daily commute and rides, long and short, he had had an unbroken experience of what these models had to offer, for around two decades, thanks to other examples of these models that were his. “When I bought either of these two bikes, I would sell the one of the same model that was in my possession.”

From 1985, when he began to flaunt his very first Roadking on the streets of Ayanavaram, leisure has largely been a two-word concept for him — ‘Roadking’ and ‘Classic’.

While discussing the same with this writer, his remarks hardly betray a bias for any of the two. He does punctuate the superior qualities of one not to set one over the other, but only to bring out the contrast. By virtue of its bore’s greater dimensions, the Roadking had an edge over the Classic in any show of speed.

Murali Mohan cannot keep Sholavaram-speak out of his chats, having grown up on conversations around the iconic racetrack and Yezdis’ performances in it. It is hardly coincidence that he consults mechanic Jyothi, among the veterans of the Sholavaram racing ecosystem. Murali Mohan however never gave in to the temptation of putting his Yezdis to the test on what was then a T-shaped track, by souping up their engines.

Jyothi, who was operating in Ayanavaram, the locality where Murali Mohan lived for 50 years, was in those days known for preparing motorcycles for Sholavaram based on the given specs.

Though Murali has moved to Old Mahabalipuram Road and Jyothi to Ayapakkam, the two have struck up an inalienable friendship made possible only by these Yezdis. “I am having my Yezdis serviced by Jyothi for 35 years. He is 70 years old.”

Mobility and Yezdi are inseparable terms for Murali, and he would feel handicapped if any of his two metallic steeds needed to be “rested” — so, he seldom lets things get that far.

“The Yezdis I have ridden in Ayanavaram, which include these two, are popular because I would take them wherever I went — whether to my office or to the store round the corner.” It is just around two months since he moved to Old Mahabalipuram Road, and Murali has no qualms about subjecting the machines to the same punishing schedule. Only that Murali has slowed down a bit, having retired as junior engineer from the Southern Railway in 2018.

The evident advantage of growing alongside a hobby into adolescence, adulthood and maturity, is that you do not have to cast around for one when you hang up your professional shoes.

When the hobby concerns a machine from a bygone era where automobile technology was defined by mechanics more than electronics, there is a lot out there to tinker around with.

Working on the parts is an option as these machines bring with them the notion of frugality, encouraging the owner to refurbish many of the parts periodically to keep them going till they cannot go on anymore.

There is a raft of tuning and cleaning chores that Jawa and Yezdi owners are thankful for. One of them is setting the points in the ignition system to razor-thin accuracy. The ignition system in the earlier models were based on contact breakers, requiring this craft.

While Murali Mohan sets great store by maintaining his Yezdi vehicles in their original form and function, he has made a minor departure from this self-imposed rule.

He has switched the ignition system in his Roadking to an electronic CDI system, which was not a feature of the Roadking until the 1990s.

“However, I have the whole CB point unit with me so that I can fit it in the Roadking and ride it the way it was first ridden.”

There certainly would have been one huge takeaway from Murali’s session on Jawa Day for young Yezdi enthusiasts. To illustrate it, here is a slight reworking of a well-known aphorism — the dawn almost always defines how the day would be.

Murali has had a soul-satisfying run in this hobby largely because he packed so much into it in the early years, which created a critical mass of energy that has propelled him through the decades.

“In 1985-86 itself, I had covered a lot of ground with my Roadking, undertaking many long trips.” Those trips include a pilgrimage to his Yezdis’ birthplace — Mysuru.