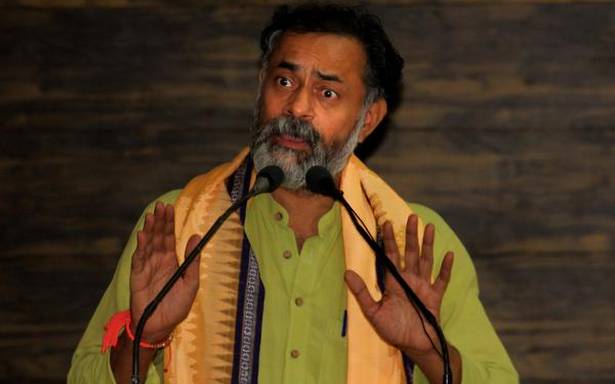 “We have seen how the ruling party has resorted to violence upon being terrified by the farmer stir in Lakhimpur where son of MoS of Home ran over protesting farmers. Our main demand is removal of Mr. Mishra for delivering provocative speech. He does not have the moral right to continue as Union MoS for Home for spreading violence,” said Mr. Yadav who was here to attend a Odia daily’s foundation day celebration.

“Farmers have been mowed down, democracy trampled and Constitution crushed. Opposition leaders are not allowed to go there. Chief Minister’s helicopter cannot land there. The country had not seen such shameful act to destroy democracy,” Mr. Yadav said.

“Whenever the Bharatiya Janata Party leaders tried to go to protest anywhere in the Opposition-governed States, they had never been prevented. Opposition leaders are not being allowed to go to Lakhimpur which is a violation of the fundamental principles of democracy.

“The Union MoS for Home himself made inflammatory speech to instigate violence. The Haryana Chief Minister was seen asking people to take up batons and not to be afraid of. I don’t know what is happening in the country,” said Mr. Yadav.

“The BJP is so terrified by the farmers’ protest that it thinks violence is the only way out to handle the situation. They don’t see anything beyond violence. Farmers will not resort to violence how much provocation there may be. I appeal to all farmers not to respond to provocation with violence. Non-violence is the main stay of the protest. We will fight and win.”

Appealing all to go to Uttar Pradesh to find out what was happening there, Mr. Yadav asked, “It has been a devious art of the saffron party to twist fact and shadow the truth in a blanket of lies with the help of media. Can the BJP show any video of farmers resorting to violence before they were run over by a convoy of a Minister’s son?”

On the future of the protest in the wake of violence, Mr. Yadav said, “The protest has managed to achieve three major successes — bringing self-esteem of farmers back, realisation of farmers’ political power and establishment of farmer unity. The stir will continue till the three farm laws are taken back.”