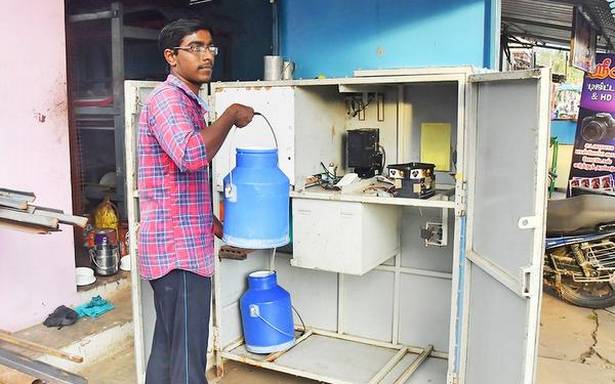 A milk vending machine designed by a youth at Kalappanaickenpatti village in Senthamangalam Taluk is helping people to purchase farm-fresh cow milk even for ₹ 5.

While pursuing his final year mechanical engineering at a college in Chennai, the 24-year-old C. Balamurugan had an idea to design a milk vending machine that would benefit both the farmers and the people. He designed the machine that initially accepts only cash and dispatches the milk in containers. He took one year to redesign and added more features to the machine by which card system and recharging the cards in the machine was introduced.

“The machine, placed at my relatives store on Kollimalai Road, has received good response as people are getting fresh milk,” he said. Milk from his cows and from his neighbours are stored in the 40-litre container and are available from 5.30 a.m. to 8 a.m. and from 4.30 p.m. to 6.30 p.m. everyday. Mr. Balamurugan said that by using a card, customers can avail milk even for ₹ 5 or ₹ 10.

The system helps people who do not have refrigerators as they purchase milk for ₹ 5 twice a day.

Mr. Balamurugan said that the cost of the cooling model in which milk can be stored for a day is ₹ 1.75 lakh while a basic model without cooling system comes around ₹ 60,000. He has started receiving inquiries from farms and traders for making customised vending machines.