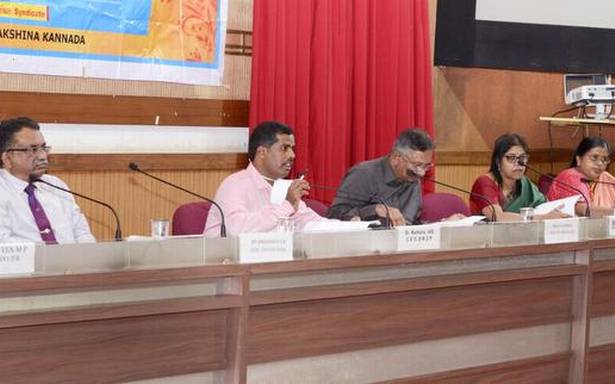 Dakshina Kannada Zilla Panchayat Chief Executive Officer Kumara on Wednesday regretted that banks in the district did not reach lending targets in some of the priority sectors and directed officials to conduct field visits in rural areas to create awareness among people about the available facilities.

Chairing the quarterly meeting of the district consultation committee and the district-level review committee meeting here, Mr. Kumara pointed out that banks had registered just 35.27%, 35.4% and 22.34% achievements in agriculture, education and housing loan sectors, respectively.

They can register overall growth only if banks pay adequate attention to priority sector lending, he cautioned. Banks that did not meet even the minimum requirement should send their officials to rural areas for creating awareness, he said.

Meanwhile, he said that people might distance themselves from banks if the latter did not provide adequate information about social security schemes of the government to eligible persons. While the RBI too has directed complete coverage of social security schemes, banks should focus on providing these schemes to backward classes, marginal income people and the most backward people.

Mr. Kumara took serious exception to some banks demanding surety for MSME (micro, small and medium enterprises) Loan Schemes that provides loans up to ₹2 crore. Many complaints have been received, he said and directed banks not to seek surety for such loans. He also asked banks to hasten loan disbursal to women from Scheduled Castes, Scheduled Tribes and backward classes for self-employment and bring it under the Standup India scheme.