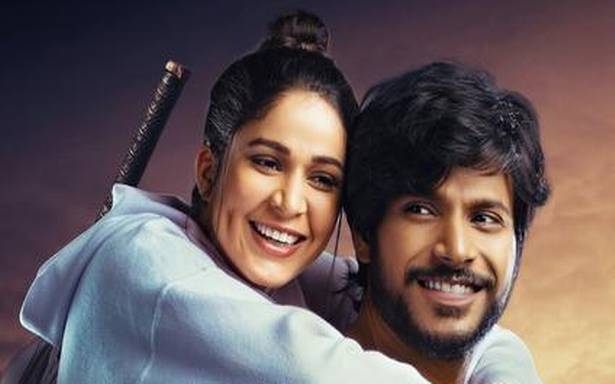 This tale of friendship, sports and romance has its moments but could have been way better

A1 Express tries to be several things — an underdog sports drama, a story of friendship, a story of a banished player rediscovering his mojo to win, and a youthful entertainer with comedy and romance. Nothing wrong with that. Several sports dramas have also been stories of human relationships, of unlikely people coming together to win amid trying circumstances.

The issue, however, is that A1 Express doesn’t succeed in blending these different aspects into a cohesive whole. There are bright as well as moving segments that could have been leveraged better to make for a rousing sports drama that tugs at your heartstrings.

The story is based on the Tamil film Natpe Thunai and keeps the core idea of friends and sports intact. A sports ground in Yanam is the bone of contention. A corporate wants to take it over and the sports minister Rao Ramesh (Rao Ramesh) is a willing, corrupt conduit. The no-nonsense coach Murali (Murali Sharma) is determined to save the ground and thereby, the future of aspiring hockey players. Watching all this unfold helplessly is an elderly man who remembers hockey’s glorious days and holds on to hope.

Walking into this situation is Sundeep Naidu (Sundeep Kishan), who until then has been happy to just romance hockey player Lavanya Rao (Lavanya Tripathi). He wants to have nothing to do with the sport and is content enjoying the banter with childhood friend Satya, and dancing to Hiphop Thamizha’s foot-tapping beats.

The real hero introduction sequence, so to speak, happens close to the interval when Sundeep’s true identity is revealed. Thrown into the thick of things to help someone who is sidelined from selection, he is asked to ‘just pass the ball’ but clearly knows more than that.

It’s a mainstream cinema thing to have attention seeking ‘interval block’, but if you are wondering how even the seasoned coach hadn’t known of Sundeep’s having been a part of India A’s Under-21 team, the reasoning comes from Sundeep himself, when he talks about the plight of sports such as hockey that aren’t in the limelight and players not being recognised. A clever, tactical move to cover up any logical questions that viewers might have.

A1 Express comes into its own in the later portions when it begins to focus on the sport and the politicking that ails it. But, just a story of Sundeep leading a team to win and thereby securing the hockey ground’s future would be no big deal. So we get a flashback of what drives Sundeep to hockey and then, away from it.

These portions are predictable but the presence of off-screen friends Darshi (Priyadarshi) and Rahul (Rahul Ramakrishna) adds credence to it. Darshi is all earnestness, yet again, and does well as the fisherman’s son aspiring to be a national-level player. And Rahul is game to offer support.

The final hockey match progresses as one would expect, with all the odds stacked against Sundeep’s team and he himself having to overcome the demons of the past. There are moments that remind us of Lagaan and Chak de India. When Sundeep sits brooding in the dressing room, he looks like could do with Shah Rukh Khan’s ‘sattar minute’ motivational speech. His motivation comes in another form, not unexpected, and it works. Adding to the nail-biting match is the humour-laced commentary by Suma and Harsha.

Sundeep navigates the slightly mass-y bits as well as the sports portions with ease and sportively plays second fiddle to Lavanya in the initial portions. He also gets to show off his toned physique and his agility suits the character he portrays.

It’s a film about the hero playing the crucial game, sure, but it thankfully doesn’t belittle the woman player. Lavanya befits her part, as though happy to just sweat it out and show off the post-sport glow rather than fuss over picture perfect looks. Murali Sharma delivers, once again, as the coach. Rao Ramesh, though, is a tad over the top.

A couple of grouses would have to do with the extra energetic, relentless background score and the overdoing of the tilt-shift focus technique cinematography, which isn’t easy on the eye.

A1 Express is a mixed bag; a part of it wants to be taken as a serious sports drama and another part wants you to just have some popcorn entertainment. A little more focus would have made it a more engaging sports drama.