APJ Abdul Kalam Birth Anniversary: Known as the ‘Missile Man’ of India, Dr Avul Pakir Jainulabdeen Abdul Kalam’s 89th birth anniversary is being observed on October 15, 2020. The 11th President of India, Dr APJ Abdul Kalam‘s contribution to India’s missile research and development has been unparalleled. Dr Kalam left his imprints not just on science but also the fields that interested him like philosophy, literature, and language. He penned a number of books including Wings of Fire: An Autobiography, India 2020: A Vision for the New Millennium; 22 poems, and four songs during his lifetime.

On July 27, 2015, he collapsed while delivering a lecture at IIM-Shillong, and later passed away. However, he left behind a legacy, and his words inspire and motivate everyone even today. Celebrating his life and legacy, here are some lesser-known facts and inspirational quotes and thoughts by him.

*As a 10-year-old growing up in Madras, he started selling newspapers to help his father support the family. He would go to Rameswaram Road Railway station to collect the newspapers. It was a time of war, so the Madras Dhanushkodi Mail, which carried the papers, would pass through the station without stopping. The bundle was thrown from the running train to the platform from where he would collect it.

*Dr Kalam would get up at 4 am to take his mathematics lessons. He would also take a bath before going to class — a condition imposed on all students by the teacher.

*Dr Kalam was a strict vegetarian.

*Although he grew up in a Muslim family, Kalam was well-versed in Hindu traditions and was secular at heart. He learnt Sanskrit and was an avid reader of both, the Quran and Bhagavad Gita. *Dr Kalam never owned a television. His personal belongings included his books, some clothing, veena, a CD player and a laptop. He was an avid reader and used to read books on cosmology.

*Dr Kalam donated his entire salary and savings to a charitable trust- PURA (Providing Urban Amenities to Rural Areas) – that he had founded. He was of the opinion that after becoming the President of India, the Government of India will take care of him till the end of his life, so why not use his salary for better things.

ALSO READ | Have to handle failures with a stout heart: APJ Abdul Kalam

*Dr Kalam was honoured with doctorates from 40 universities.

*Dr Kalam is among the only three presidents of India who were conferred the Bharat Ratna before they were elected President.

Here are some inspiring quotes by the great leader “You should not give up and we should not allow the problem to defeat us.” “I was willing to accept what I couldn’t change.”

*”Man needs difficulties in life because they are necessary to enjoy success.” 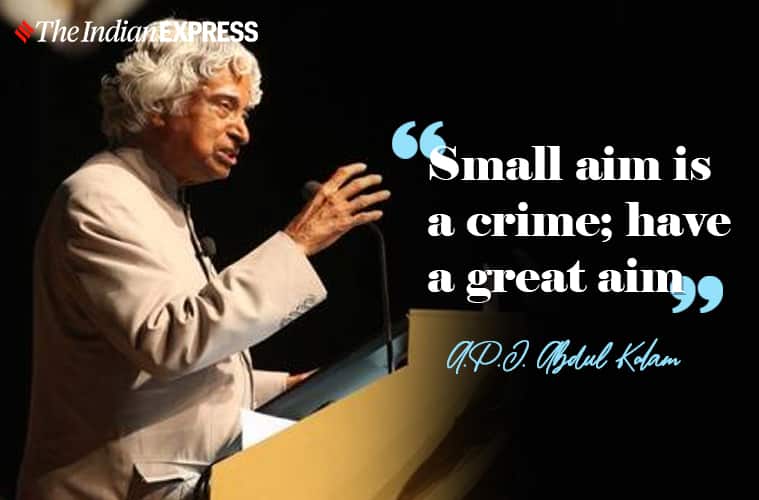 “I am not handsome but I can give my hand to someone who needs help… Because beauty is required in the heart, not in face…”

For all the latest Lifestyle News, download Indian Express App.