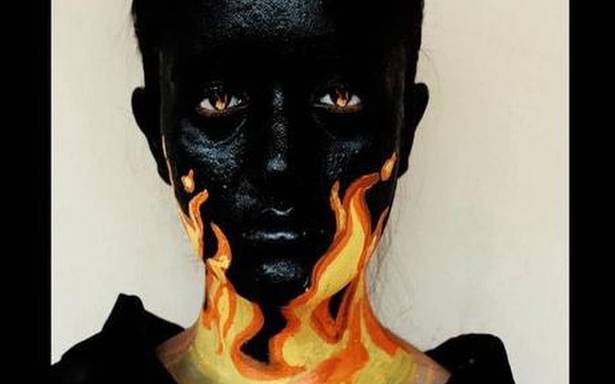 A photograph of her mask covered with flowers was 23-year-old Meera Chandran’s first reaction to the lockdown that began in March 2020. ‘Spread love, not germs’ was the caption that accompanied the picture posted on July 11 last year. The next picture exhorted people to ‘break the chain’ of infections. There was a bunch of unlit matchsticks plastered on her left cheek while the matchsticks on her right cheek were shown burning. The third had a stark warning: ‘Six feet away or six feet under,’ with one side of the photo featuring her face devoid of paint while the other side was painted black.

Over the past year, the Kollam-based architect has won a following on Instagram for her face art, which she uses to highlight current issues, sexism, racism, the farmers’ protest, and so on. Her face is her canvas, where a wide range of art is executed. She then clicks selfies that are shared on her Instagram account. Although she is no expert when it comes to make-up, she seems to know intuitively how best to capture an idea with the help of collage, paints, Photoshop and installations, all on her face, which has been covered in flowers, newspapers, clay, and a whitening mask among other things.

“Words do not come easily to me. Lines, colours, shapes and textures speak to me, helping me express my thoughts, concerns and opinions,” says Meera.

When the lockdown began, she felt overwhelmed by the sudden changes in lifestyle that isolated people and began to change their behaviour. “I saw how neighbours and friends were ostracising people with COVID-19 instead of helping them. That is why I posted a photograph of my face wearing a mask covered with flowers. I found that people react to images more quickly and strongly,” she says. She firmly believes that pictures speak louder than words and language is never a barrier when it comes to art.

The self-taught artist has been an entrepreneur from the age of 19 with her own line of clay jewellery (@mannu_by_meera), as well as a line of clothing (@_studiounicorn). Although she had already been dabbling in face art on her Instagram account (@meerachandran), it was during the lockdown that she came into her own with some searing images of facial art. There’s one photograph that is bound to strike a chord with every woman in India — a multitude of eyes are painted on her face, and it is captioned ‘All eyes on me, but I chose to be free.’

Architect Meera Chandran’s photograph of her mask covered with flowers was her first reaction to the lockdown in March 2020 | Photo Credit: Special arrangement

She states: “There is the most dangerous life of all, living a life that is scripted and judged by others. Try to unclip your own wings, maybe help yourself to fly, and rise up from the fall for the hundredth time, and then you taste freedom and that is absolute joy,” she says, adding, “This is a feeling that must be common to all females. It is self-explanatory.”

On October 1, Meera was enraged by the news of the rape and murder of a Dalit woman in Hathras, whose corpse was then burnt by the police. As a reaction, she painted her face black and worked on the photograph to show flames enveloping it, with the caption ‘Stood and let her burn’.

To support the farmers’ protest in Delhi, she covered her face in mud and let it dry in furrows and lines that resembled the parched fields and weather-beaten faces and feet of the farmers. Another shows her face covered with the word ‘Imperfect’. “I was reacting to a personal issue,” she says with a laugh. “Most teenagers have issues with their face and figure. I had acne, which filled me with angst during my school days. It was to remind all of us that we are all imperfect in some way or the other, and to embrace our imperfections.”

On one occasion, tired of the negative news that was flooding the media, she covered her face with a collage of newspapers enclosed by a ring of fire. “I felt that the media was completely engulfing our lives… it was taking over my senses,” she says.

Meera believes her art is inherited from her mother, a trained artist who could not take it up professionally. “I have picked up some tips from her. But the facial art is my idea and my family supports me,” she says. Although she has no plans for an exhibition in the near future, her works on Instagram have won her recognition. With evocative captions and pithy explanations, her photographs caught the eye of dancer-actor Rima Kallingal, who invited Meera to collaborate on her new production, ‘Rise’. Her work won her another assignment, this time with a band. She will be designing futuristic costumes and facial art for their music video.

Meera refuses to let her art be confined to blueprints and buildings. “I continue to work as an architect and also indulge my creativity as an artist,” she says.