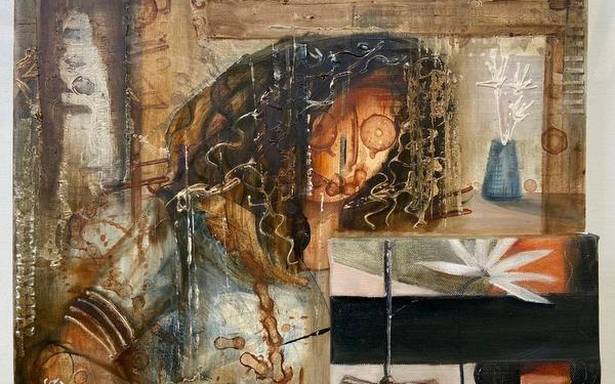 An art work on the wall, a family photograph with faces that have grown familiar by now, a cat or the shadow of a human… such sights offered artist and teacher Shalu Juneja a peek into her students’ personal spaces, thanks to virtual classes. She found herself observing little details that almost began to define the spaces she saw on screen every day. Her recent series, ‘Zoom’, is a teacher’s perspective on virtual reality.

As the co-director and founder of Uno Lona Academy for arts based in Ahmedabad, Shalu says her connection to her students was one of physicality that existed within a space. “Online classes changed the dynamics. Through these small windows, our personal spaces are revealed in seemingly distorted perspectives. As discomforting as it is, it creates a sense of voyeuristic intrigue,” she says.

A work from the ‘Zoom’ series

Born and raised in Chennai, Shalu moved to Ahmedabad after marriage in 1989 where she lives and works. She co-founded the art academy in 2016 with her son and artist Harsimran Juneja and started teaching in 2019. “I often feel the line between teaching and learning is blurred. I believe teaching is the best form of learning,” she says. Though she works across media, Shalu is drawn to ceramic sculptures and murals.

“During lockdown days, there I was peeping into private spaces — lifestyles, walls, windows, patterns, objects, and sometimes glimpses of people who walked past or lurked behind as shadows. I had become what a spirit would be. So close, yet so far… There but not quite,” she adds.

‘Zoom’ is an abstract series of three paintings done in oil and mixed media, where she employs a masking technique using indigo water, rust, earth, thread and other pieces of scrap. It is an extension of her ongoing series called ‘Body Language’ that removes the form, yet explores the connection between the realistic and the abstract. ‘Body Language’ has 25 to 30 works that focus on the female entity — eyes, faces, belly, the umbilical cord — juxtaposed with Nature.

“I think I get carried away by this kind of texturing. It is the connection I feel with the earth. Wet mud in splashes of sienna, a sense of erosion created by thread, patterns formed by organisms in rust marks, and the scorching earth represented as burn marks on skin calmed by the smoothness of indigo,” says Shalu.

Shalu believes that though students and art teachers miss the creative energy of a studio environment, the lockdown has been an inspiring time for artists. “There is a change happening, politically, culturally and socially. The idea is to keep working every day, I tell my students.”

She is also inspired by poetry or lyrics of songs she often writes. She has completed a series of water colour sketches and ceramic sculptures based on her romantic poem, “Moon in the Lotus Pond’.