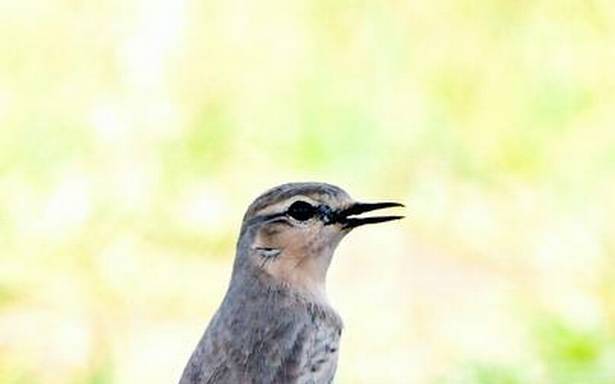 The Isabelline Wheatear is a little brown bird found in Russia, Central Asia and northern Pakistan. When it was spotted at the wooded campus of the Kerala Police Academy at Ramavarmapuram in Thrissur, photographer VG Vinod’s interest was piqued. He looked it up online, cross checked with a bird-watching group and verified with experts before concluding that it was indeed the Isabelline Wheatear on a brief migratory stop on the campus.

The campus, sprawling across 348 acres, receives a number of migratory birds, some of them rare. Vinod, a senior civil police officer, with the then Director of the Police Academy and present Director General, Kerala Fire and Rescue Services, Civil Defence and Home Guards, B Sandhya, decided to document this bird wealth in a book. Titled Parakkunna Soundaryangal (Flying Beauties), the book in Malayalam, published by the Kerala Bhasha Institute and released recently. Containing photographs and descriptions of 96 species, it can be used as a field guide to the bird life in the Police Academy.

They approached former head of the department of Zoology at the University College, Thiruvananthapuram, Professor E Kunhikrishnan, who helped in identifying species. Satheesh Chandran at the research wing of Kerala Police and Jayesh Joseph, from Criminology, helped with fact checking and verification. Vinod, who works at the District Police Photographic Bureau in Malappuram, has been photographing birds within the Academy campus since 2016. Whenever he got a chance to visit the Academy for official meetings and work, he made it a point to walk around the campus that is rich in biodiversity. Over six years, Vinod has an impressive collection of photographs. “I had not thought of bringing out a book. I was planning to showcase the photographs in an exhibition, with the backing of the State police force,” says Vinod.

Sandhya, however, encouraged him to publish it as a book. A poet and author, who has 17 books to her credit, Sandhya took initiative, helping Vinod in his quest to identify some species and to co-ordinate the book. She had been observing a variety of birds herself on her morning walks on campus. “I called Vinod to accompany me on my walks and we started looking at the birds keenly,” says Sandhya. With a background in Zoology, Sandhya says her interest in Nature goes back a long way to her childhood.

On their two-hour walks (from 6.15 am to 8.30 am), Sandhya and Vinod came across many different species. “One day, we realised we had a huge collection of images. I thought why not create a handbook,” says Sandhya.

Only those species with good photographs have been included in the book. One of the reasons why the Academy attracts birds is because of the way its surroundings have been preserved. “We had always taken care of the trees and the undergrowth within the campus. We created two water bodies within the campus, with the help of our staff and trainees, which have now become an excellent ecosystem for water birds, including relatively uncommon species such as little grebe, woolly-necked stork and the Asian open-billed stork,” says Sandhya. “Even if we don’t actively do anything towards conservation, we can definitely refrain from disturbing the environment.” The book, she adds, would be an inspiration to the younger generations to help maintain the bio-diversity in the Academy.

A second edition of the book is also on the cards. “Without support and encouragement from Sandhya (ma’am), it would have been impossible to bring out the book,” says Vinod.

Sandhya gives a poetic prelude to each species in the book, followed by scientific information on the species including its scientific and common name, habitat, food, reproduction and physical attributes. The book is not just for birders, but appeals to anyone who loves birds, words and Nature.

Parakkunna Soundaryangal has 216 pages and can be bought from the Bhasha Institute book stalls or ordered online. It is priced at ₹400.